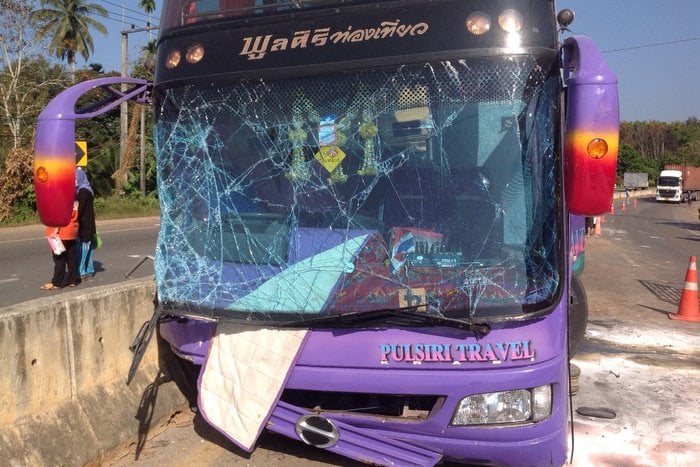 PHUKET: A 70-year-old Danish tourist was injured this morning when the Phuket tour bus he was travelling in hit a central road barrier north of Krabi Town.

Suwit Suthimon, the driver of the Pulsiri Travel bus involved in the accident, told police that he swerved to avoid a motorbike that had entered his lane.

The emergency maneuver forced him to ram the central barrier and bring the bus to a grinding halt in the middle of a four-lane highway in Khao Khram, north of Krabi Town.

Mr Suwit told police that he had picked up about 15 tourists from Phuket International Airport and was en route to Ao Nang, Krabi, when the accident occurred at about 8am.

“They were bleeding and bruised, and some were nearly in tears from their injuries,” he said.

“He was taken to Krabi Hospital in Krabi Town,” said Maj Chatchai.

While police were attending to the wounded from the tour bus crash, a pick-up truck slid on the engine oil that had spilled across the road about 50 meters behind from where the bus had come to a stop.

“The pick-up hit a Myanmar man riding a motorbike. He suffered a broken leg and was also taken to hospital,” Maj Chatchai confirmed.