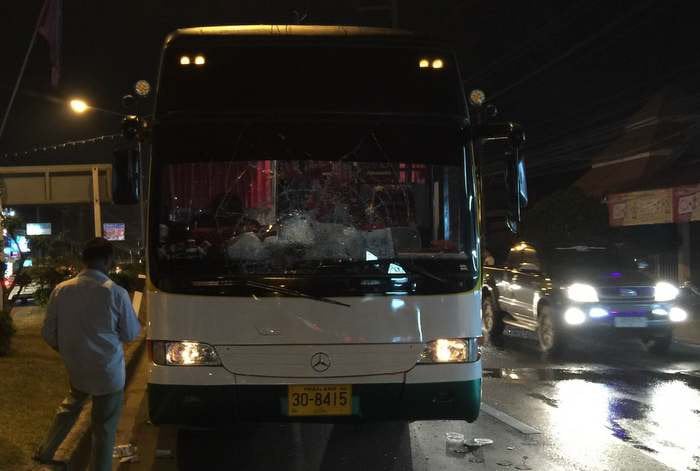 PHUKET: A man nabbed for ya ice (crystal methamphetamine) made a daring dash from the fingerprinting area of the Thalang Police Station only to get hit by a Chinese tour bus last night.

Natthawut Chaipaew, 23, was arrested for possession of a Category 1 drug and was in the midst of having his finger prints taken at Thalang Police Station at about 8:45pm, when he escaped.

“I was just holding his hand and pressed his fingers in the ink for the fingerprinting when he bolted for the door,” Lt Sakorn Boorananau of Thalang Police told the Phuket Gazette.

Mr Natthawut scrambled out of the police office and started running past the Thalang District Office. It took officers about 30 minutes to track him down.

“When we finally spotted him, he was nervously looking to cross Thapkrasattri Road, just 700 meters north of the police station,” said Lt Sakorn. “Then he went for it.”

As Mr Natthawaut attempted to cross the road, a Chinese tour bus struck him. A second tour bus then crashed into the bus that hit Mr Natthawuat.

Mr Natthawut suffered a broken leg in the accident and was taken to Thalang Hospital. No other injuries were reported.

“We have added evading arrest charges to his file. However, we’ve yet to charge anyone for the accidents,” Lt Sakorn said. “We are waiting to question the drivers.”