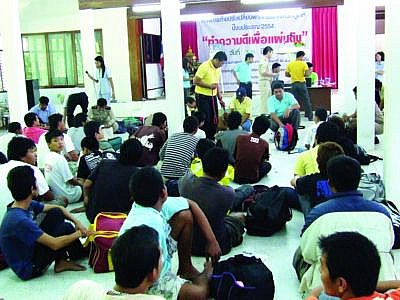 The five-day “camp”, run by the Phuket Heath Office, aims to help first-time offenders kick their habits before they become repeat offenders or get involved in serious drug crimes.

“All of them have been found guilty of minor drug charges and are on probation. Most of them are from Phuket and do not want to be involved in drugs again, so they have volunteered to join the camp,” explained nurse Jehaluemoh Phuntarakit.

However, any offenders who choose to not attend the camp must abide by any other conditions laid down by the Phuket Probation Office as a condition of their suspended sentences, she added.

The camp ‘option’ also keeps first-time offenders on minor charges out of the already-overcrowded Phuket Prison.

Instead, the convicts move into a dormitory near the Office of Non-Formal Education near Provincial Hall in Phuket Town.

Day One of the camp began with a sniffer dog searching the participants’ belongings for drugs.

“The campers are not allowed to bring in their own medications. Any medicines needed are provided by health officers running the camp,” explained Ms Jehaluemoh.

The campers complete a full schedule of mental, physical and spiritual activities to help them steer clear of ‘wayward paths’ that might lead them back to drugs.

Those who pass at the camp will graduate with a certificate confirming their successful completion of the course.