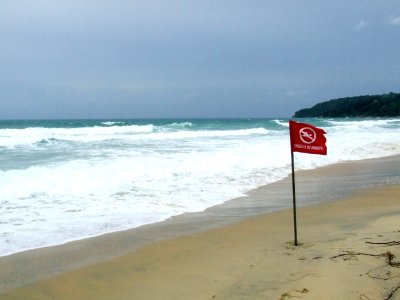 PHUKET: The drowned Bahraini tourist whose body was recovered at Karon yesterday was a former lifeguard, according to a report in the Bahrain-based Gulf Daily News website.

Mr Al Abdul, who entered the surf with the deceased, was saved by members of the Phuket Lifeguard Club.

For the previous report of Mr Alsaeed’s drowning click here.

Mr Al Saeed planned the trip to Phuket in celebration of his new job as a physical education teacher, a position he was due to start in September.

He leaves behind his parents and four siblings.

His body will be flown to Bahrain via Bangkok, Bahraini consul in Thailand Khalil Al Khayat was quoted as saying.

The body was identified by friends and relatives at Vachira Phuket Hospital.

Mr Alsaeed worked as a lifeguard at a water park in Bahrain from February to July before resigning to take his post as a physical education teacher at the ministry.

Mr Alsaeed was one of two foreign tourists to drown at a Phuket beach on Sunday, despite the presence of clearly visible red warning flags.

The other was Chinese tourist Chao Dakun, who reportedly died at Patong Hospital after being pulled unconscious from the water at Kata Beach.