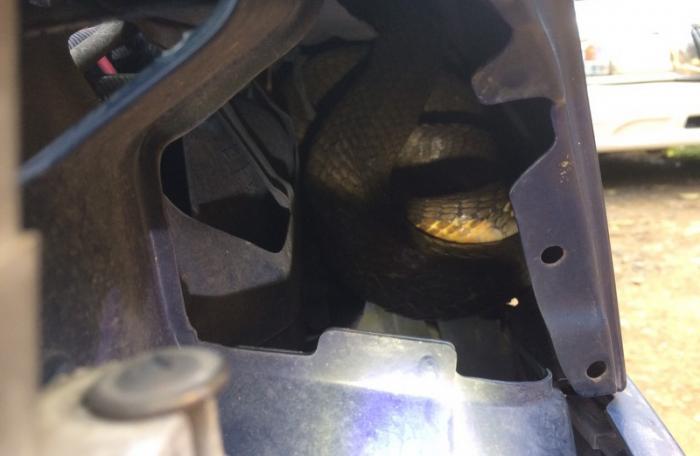 KRABI: Snake catchers in Krabi pulled a large king cobra from a car yesterday. The deadly three-meter-long snake had hidden behind the headlight of the car after falling onto the vehicle from a tree.

Suchayanmak Sukapan, 42, had parked her car under a tree in front a house in Din Udom sub-district, Lamthap District, when she happened upon the snake.

“I was getting in to my car when I heard something fall on the hood. A big cobra had fallen out of the tree and then crawled underneath the hood of my car so I called in the local snake catchers,” said Ms Suchayanmak.

A crowd gathered to watch the volunteer snake catchers, who spent about 30 minutes trying to lure the snake out from inside the housing of the front-left headlamp. They eventually removed the housing and used a snare on a long stick to catch the cobra.

“I was so shocked and scared. It’s lucky I saw it before I drove off,” said Ms Suchayanmak.

The snake catchers warned the public to be extra vigilant for snakes, especially in wooded areas, and advised always keeping windows and doors shut. To contact volunteer snake catchers call 1669.