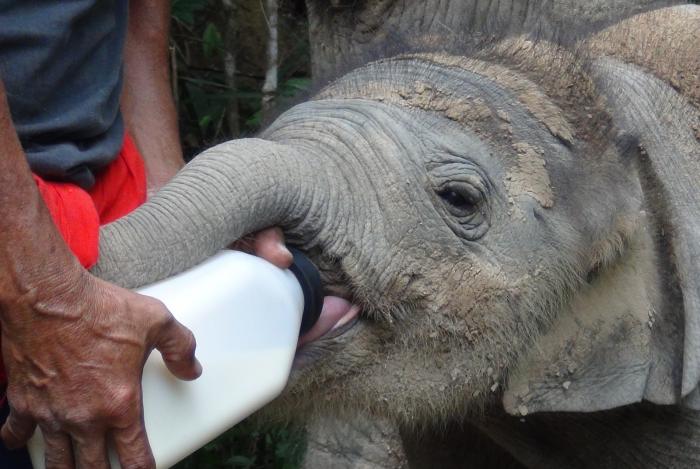 KRABI: A vet in Krabi is appealing the public to help fund milk supplies for a newborn male elephant who was rejected by his mother and needs up to 20 liters of infant formula a day.

The baby elephant was born on September 7 to a 20-year-old elephant named ‘Pang Rampai’. However, the mother is refusing to feed the young pachyderm so veterinarian and elephant keeper Kajornpat Boonprasert has moved the baby to an elephant hospital in Klongthom District.

“The baby elephant’s mother rejected him and tried to harm him. We tried to keep him close to his mother, but she can’t produce enough milk. This had stunted the baby’s growth and he has dry skin as a result,” said Mr Kajornpat.

“We started feeding him powdered milk for babies but he consumes 10-20 liters a day, which costs about 1,000 baht each day, but that is more than we can afford.”

Mr Kajornpat confirmed that the 26-day-old baby elephant’s condition improved considerably after he was hospitalized. However, he still needs to be closely monitored.

“As it is the end of the year, we don’t have enough money left in our budget to provide for him,” said Mr Kajornpat.