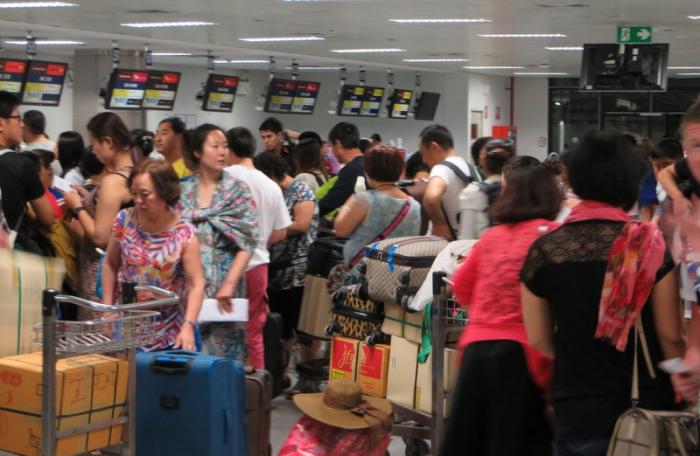 PHUKET: Continuing growth in the region’s tourism industry is being driven mainly by China, according to the latest CBRE ‘Hotel Megatrends’ viewpoint report, released in September.

The total number of Chinese outbound tourists rose by 10 per cent year-on-year to 128 million in 2015, while spending grew by 26 per cent over the same period to reach US$292 billion. China is expected to continue to lead growth, with around 134 million intra-regional trips forecast to be taken by mainland Chinese by 2020, cited the report.

In 2015, China ranked in the top three tourism source markets for ten out of 12 major countries in the region. Chinese arrivals to Japan doubled on a year-on-year basis in 2015, thanks to the rapid depreciation of the yen and more accommodating visa policies.

However, according to research by the Financial Times, Chinese tourists generally spend the largest portion of their budget on shopping and just a small portion on accommodation.

“In the first half of this year, Chinese arrivals have continued to be Thailand’s largest feeder market, making up 30 per cent of tourist arrivals into the Kingdom, and accounted for 38 per cent of total arrivals to Phuket. Hotel performance here has continued to be driven mainly by strong Chinese arrivals with record high occupancy the first half of the year,” reported James Pitchon, Head of Research & Consulting at CBRE Thailand.

“China will continue to lead growth in outbound travel and spending. While previously Chinese tourists may have seemed reluctant to spend big on accommodation, there are signs that they are beginning to take a greater interest in hotel quality and service. This is a significant opportunity, but hoteliers need to ensure they provide a service offering that meets the requirements of this increasingly important demographic,” commented Robert McIntosh, Executive Director at CBRE Hotels, Asia Pacific.

Research indicates that Chinese tourists are not overly price sensitive toward accommodation. A 2013 survey found that only 10 per cent of respondents selected price as their most important consideration when selecting a place to stay on an overseas trip.

“Chinese tourists are most concerned about the comfort, star rating and facilities offered by hotels, along with a hotel’s reputation and recommendations by friends and family and/or travel sites. Cultural and language barriers, such as Mandarin speaking staff, signs and literature were also seen as important and Chinese travellers are increasingly demanding that hotels provide them with tailored services that better fit their culture, while helping them to overcome the language barrier,” Mr McIntosh added.

While the increase in Chinese outbound tourists will drive demand for accommodation, the rise of shared accommodation poses a major challenge for the traditional hotel industry.

Advances in technology have made it possible for hosts to offer rooms or apartments for short-term rental via online platforms. Airbnb is the market leader, covering more than 191 countries and offering more than two million rooms or apartments for rent. Other active players include HomeAway, FlipKey, Rommorama and national level operators such as Tujia in China and Homie in Singapore.

Across the Land: In the Departure lounge to Damascus