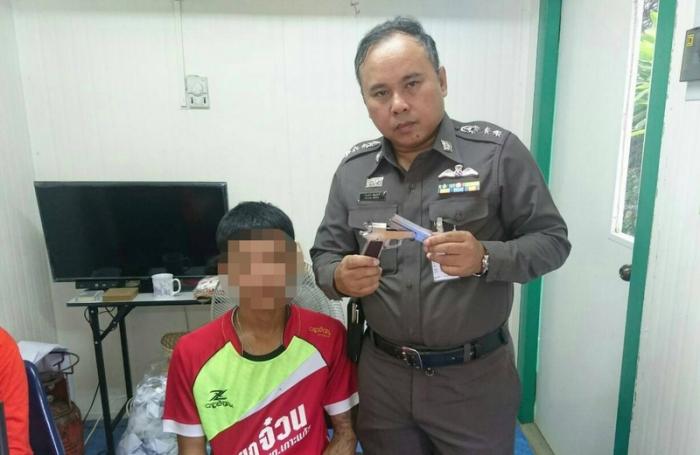 The 23-year-old suspect, Pawarut Thepabutra, told police that he left his house about 5am on the morning of the incident with his girlfriend to join a Vegetarian Festival parade at Bang Neow Shrine in Phuket Town but then went back home when it started to rain.

On the way home, riding against the flow of traffic, Mr Pawarut nearly collided with another motorbike ridden by Chayan Srinual (story here).

Mr Pawarut admitted to Sakoo Police that he became enraged when Mr Chayan shouted at him for nearly causing a crash so he turned his motorcycle around, chased down Mr Chayan and shot him.

Mr Chayan is under close observation after several surgeries for his gunshot wound. The bullet passed diagonally through his rib cage and was lodged above his groin.

“Our investigators checked CCTV footage and canvassed locals before learning that Mr Pawarut was our man,” said Sakoo Police Superintendent Jirasak Siemsak. “We found him hiding at a house in Sakoo, where he lives with his girlfriend.”

The suspect handed over to the police the .38 caliber pistol he’d used in the shooting.

“At this stage, we’ve only pressed charges against Mr Pawarut, not his girlfriend,” Col Jirasak said.

Mr Pawarut was charged with illegally possessing a firearm and ammunition and carrying a firearm in public without permission. Meanwhile, police are collecting more evidence to press attempted murder charges.