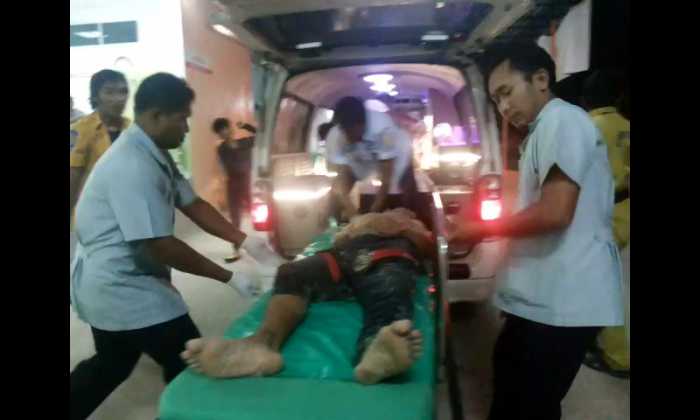 PHUKET: A man who went swimming off the east coast of Phuket late last night is in hospital after being saved from drowning by two friends he was drinking on the beach with.

Rescue workers from the Kusoldharm Foundation were called to Tala Beach in Pa Khlok at about 11:15pm.

“We arrived to see two teenagers trying to help their friend after they saved him from drowning,” one rescue worker told the Phuket Gazette.

“We stabilized the man, Pongchai Wongjumnean, 24, at the scene and rushed him to Thalang Hospital.”

Thammasat Kuenjana, 18, told rescue workers that he, Mr Pongchai and a 15-year-old friend were all laborers who lived in the area.

“They were on the beach drinking when Mr Pongchai decided to run into the sea,” the rescue worker said.

“The two friends sensed that something was wrong after they realized they had not seen Mr Pongchai for a while. Luckily for Mr Pongchai, they ran into the water and pulled him out quick enough to save his life.”

Doctors at Thalang Hospital confirmed that Mr Pongchai remained under observation and will undergo tests to ensure that he has recovered enough before he is discharged.