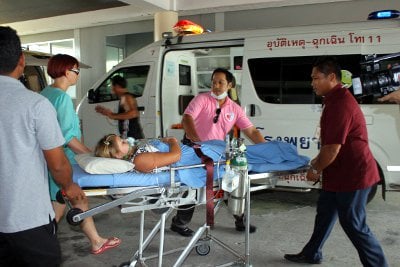 PHUKET: Dozens of tourists and resort workers were rushed to hospital this morning after a mix of pool cleaning agents “exploded” into a cloud of gas beside a pool at a Phuket resort.

Staff at the Phuket Orchid Resort in Karon confirmed to the Phuket Gazette that the cloud of gas was formed by a mix of chlorine and other cleaning agents rapidly expanding in a tank beside the pool.

“It was not a bomb,” said one resort worker.

Officials have confirmed that at least 10 Thais and 26 foreigners were rushed to Patong Hospital for immediate treatment.

As all of those affected have suffered chlorine inhalation, they have been transferred to Phuket International Hospital, Bangkok Hospital Phuket and Vachira Phuket Hospital in Phuket Town for further treatment.

One father on holiday with his family from Norway told the Gazette that the major symptoms suffered by those affected included coughing and difficulty in breathing, sore throats and headaches.

“I heard about three or four ‘explosions’. There were about 100 people around the pool,” he said.

Staff at Vachira Hospital confirmed to the Gazette that four Thais – two males and two females – arrived at the hospital at 12:30pm.

“They are under observation and being administered oxygen to help them breathe,” the hospital staffer said.

Many of the people affected were sent to Bangkok Hospital Phuket.

A hospital worker in the Emergency section told the Gazette, “At this stage we do not know exactly how many of those affected have been sent to us. Right now we are just trying to help them as quickly as possible as they arrive.

“The most seriously affected is a pregnant woman. She is being administered oxygen,” he said.

One worker at the resort told the Gazette that the mix of chemicals was purely an accident.

“He has been maintaining pools for 20 years. Today, he just did something wrong. It was just an accident,” he said.