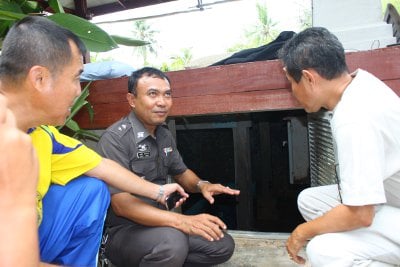 PHUKET: All the guests affected by the chlorine gas cloud at the Phuket Orchid Resort in Karon this morning have safely returned to the resort, it was announced at a press conference this afternoon.

“Every single person taken to hospital has returned to the resort. Not a single person has checked out. They are all okay,” said resort general manager Philip Raiss.

“This is not about a bomb at all, and the resort will cover all medical expenses incurred from today’s incident,” he said.

The tourists released from hospital include the 30-week-pregnant woman treated for breathing difficulty at Bangkok Hospital Phuket.

“However, she will need to return for a medical checkup by a registered pediatrician,” Dr Kanin Keeratipongpaiboon of Patong Hospital told the Phuket Gazette.

“It was not a bomb. There was no explosion,” he said.

Lt Col Boonlert explained to the media, “It is about the wrong form of chlorine being mixed. It was an accident, not a bomb.”

Muang District Chief Supachai Pochanukul went on to explain that the incident was caused by the powered form of chlorine – not the liquid form – being added to a mixing tank used to clean the pool water at the resort.

He also criticized sensational reports of the incident.

“The media should check their facts first before reporting there was an explosion,” District Chief Supachai told the press.

Paisarn Choomphol, human resources officer at the resort, told the Gazette that the incident was caused by pool technician Piyapat Nawee adding the wrong mix of chlorine.

“He has been working with us for 18 years. This morning he saw the chlorine level was getting low, so he wanted to add some more. The problem was that he is supposed to add liquid chlorine, but there was no liquid chlorine left. So he added powdered chlorine directly to the tank.

“That caused a chemical reaction,” he said.

Nannaphat Namboon, front desk manager at the resort, said, “Nobody has checked out and everything is back to normal. The guests seem happy and people are back swimming in the pool.”