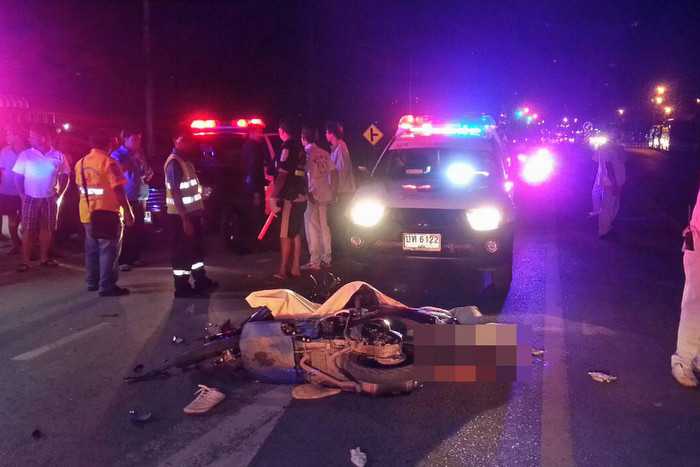 PHUKET: Police are trying to track down a pick-up truck driver involved in a hit-and-run accident that left one man dead and another injured in northern Phuket last night.

Police and Kusoldharm Foundation rescue workers rushed to the scene, near Phuket International Airport, at about 8:30pm and found 31-year-old Soonthorn Payabal dead on the ground next to a motorbike.

“Sarawut Karin, 23, had already been rushed to Thalang Hospital by local rescue workers by the time we arrived,” Lt Thanom Thongpan of the Tah Chat Chai Police told the Phuket Gazette.

Witnesses told police that Mr Sarawut and Mr Soonthorn were heading toward the airport when a pick-up truck made a sudden right turn onto the main road from a street leading to Nai Yang Beach.

“It appeared that the truck driver did not see the men on the motorbike, and hit them when turning onto the main road,” Lt Thanom explained.

The pick-up driver fled the scene after the accident.

After collecting evidence from the scene, police questioned Mr Sarawut at the hospital, where he was treated for minor injuries.

“Mr Sarawut said that he was driving the motorbike and Mr Soonthorn was riding pillion. Both of them had been staying with a friend in Baan Bang Ma Lao for a week while searching for a job in Phuket,” Lt Thanom explained.

“They were on their way to pick up a friend who had just finished a shift at Phuket Airport when the accident occurred.”

Police are checking CCTV footage in the area and questioning witnesses to try to find the truck driver.

Down at the dojo: Phuket martial arts club finds a new home