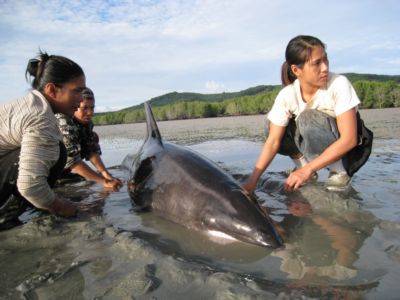 CAPE PANWA: Three rough-toothed dolphins were rescued after they were found stranded on mud flats created by the receding tide at Ao Makham on Saturday.

The rescue comes one week after the carcass of a female striped dolphin was discovered washed ashore at Baan Dan in Thalang and nine days after a pod of false killer whales beached at Koh Racha.

The dolphins, two females and one male, were found by fishermen who, together with local villagers, helped keep the dolphins’ heads and skin wet.

They also informed the nearby Phuket Marine Biological Center (PMBC), whose marine biologists came to give basic treatment to the dolphins before taking them by boat back to the sea.

However, they were puzzled as to why the dolphins were found in the mangrove as they were in good health and this species of dolphin is rare in Phuket waters.

One theory put forward was that they were fleeing a disturbance, possibly something man-made.