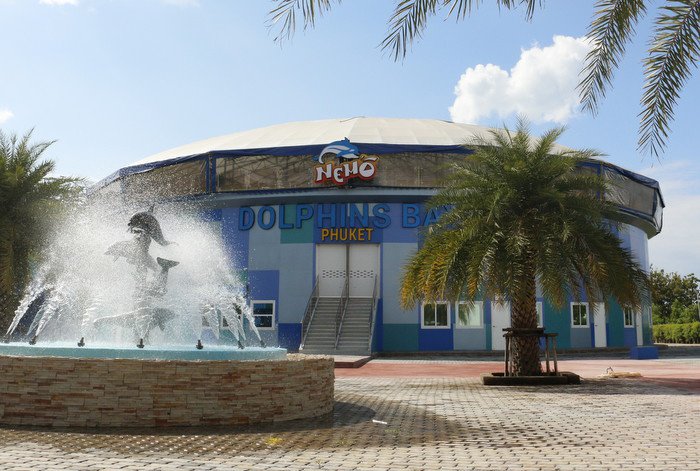 PHUKET: The Nemo Dolphinarium dolphins, which recently arrived at the controversial facility on Phuket, were not poached from the wild and have no connection to the annual dolphin slaughter at Japan’s Taiji Cove, Dolphins Bay Phuket General Manager Supreecha Suthamanondh told the Phuket Gazette yesterday.

“Our five dolphins are among 19 dolphins that were born and raised in an aquarium in the Ukraine. Each one of them has an embedded chip to verify their identity, which is registered with the Convention on International Trade in Endangered Species of Wild Fauna and Flora (CITES),” Mr Supreecha explained.

“The dolphins and two seals legally arrived in Phuket earlier this month and are now in quarantine, as training specialists and veterinarians work with them.”

Five people from the Nemo Dolphinarium in Ukraine joined the animals on their trip and are now working with Mr Supreecha to ensure that they adjust to the new facility.

“We have a lot of faith in the company, as they have been in this business for years.”

However, Sea Shepherd Conservation Society confirmed to the Gazette in 2014 that the original marine animals slated for shipment from Ukraine to the Phuket facility had a direct connection to the annual slaughter of thousands of dolphins in Taiji.

Three of the dolphins, two Pacific Bottlenose and one Black Sea Bottlenose, were born in captivity in 2012 and are being directly exported from Ukraine, said Sea Shepherd Conservation Society Asia Director Gary Stokes at the time.

Additionally, five more Pacific Bottlenose dolphins are being re-exported from Ukraine; and all five were originally caught in the wild in Japan, he explained.

“The only place in Japan that catches wild dolphins is Taiji. We had 20 Bottlenose [dolphins] shipped from Taiji to Nemo [representatives] in Ukraine a few years back. Nemo has not imported any other dolphins from Japan except these,” said Mr Stokes.

Nonetheless, Mr Supreecha assured the Gazette that such a connection did not exist between the dolphins that were finally approved for the facility.

“I understand people are concerned about the possible connection between Taiji and our dolphins. However, I can assure that they are not wild dolphins and did not come from Taiji,” he said.

The 100-million-baht facility, with seating for 900, is not only designed to be a tourist attraction, but also a learning center for students and underprivileged children, Mr Supreecha said.

Ticket prices are set at 1,200 baht per person, with discounts for students and underprivileged youth.

However, the facility has one more legal hurdle to jump through before its soft opening.

“The next step is to have the Department of Fisheries do a final check of the facility and approve it,” Mr Supreecha said.

“I assure you that we are following all the standards required by the Department of Fisheries and other dolphinariums around the world.

“Everyone is welcome to have the opportunity to see and study these animals up close – something that is not easy to do in our everyday lives.”