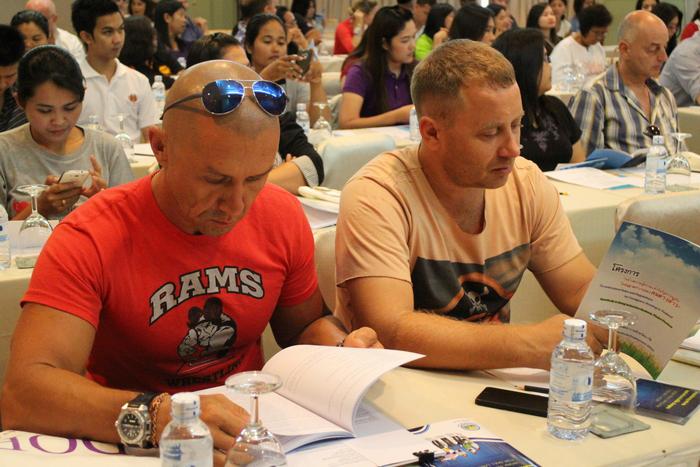 PHUKET: Local dive instructors do not need to obtain work permits for every neighboring province they visit with students, dive professionals learned yesterday at a day-long seminar organized by the Phuket Provincial Employment Office (PPEO).

The purpose of the seminar was to clarify work permits and related legalities of working in Thailand, specifically for professionals in the dive industry (story here).

The seminar was organized in response to widespread complaints from foreign dive instructors that they had been extorted by police for violating job descriptions stated in their work permits.

The complaints led to a national-level investigation of the Chalong Police force, which resulted in the Public Sector Anti-Corruption Commission (PACC) recommending two officers be charged with extortion (story here).

More than 100 members of the Phuket dive industry, both Thai and foreign, attended the seminar and submitted written questions to the speakers. The most popular question concerned geographical limits of the work permit.

“If my company has a program to take students diving in Phuket, Phang Nga, Krabi, Surat Thani and Ranong, are instructors allowed to accompany them?” was one such question.

“You have to work at the location indicated in the work permit,” responded Somchai Morakotsriwan, an officer from the Legal Division of the Department of Employment Bureau, who chaired the seminar.

“In this case, I advise the dive company to add this information to the employee’s job description as part of the work permit application. The description should state that the instructor sometimes has to train students out of Phuket and it should give the specific locations where the training will take place.”

Those divers who already have work permits that do not specify this information can get their work permits amended, Mr Somchai noted.

“You may request an addition or correction to the work permit at anytime, but please note that it will come into effect only once we have made the changes.”

The more precise companies are in describing jobs their staff will do, the fewer “holes” the job description will have, he added.

Job descriptions in work permits are stated only in Thai, and Mr Somchai was asked why they were not written in English as well.

“We don’t have enough officers who can communicate well in English. There are only about 10 in the employment office who speak English well,” Mr Somchai said through a translator.

“The solution is to ask a translator to provide you with an English version, and carry that with your work permit.”

Some attendees expressed frustration with the lack of English.

“I still don’t get it, why would the Thai government issue work permits in Thai language for foreigners who can’t read Thai at all,” said a dive company employee who declined to be named.

“They said they don’t have many staff who can speak English, but I think they could outsource the translations. It wouldn’t cost much.

“It doesn’t make sense that people who are affected by a document can’t understand what it says. However, it’s the law and we have to follow it.”

“I can’t stand it when a few officers destroy the good image for all police. We have a lot of non-corrupt officers,” Maj Gen Ronnapong said.

“We have had no extortion complaints since the March 10 episode,” he said. “But sometimes it’s hard to know about them if the business operators do not tell the police.”

Gen Ronnapong expressed his support of dive operators and explained that he had taken the position of vice president of the Association of Thailand for Underwater Sports (ATUS), the organization founded recently to formally represent divers.

“This means that I will know about every problem right away, and will be able to assign Phuket Police to solve them,” he said.

A final question asked whether divers needed to have their work permits on their person at all times, even in the water.

Taking the permits underwater is not necessary, Mr Somchai said, but work permits should be nearby.