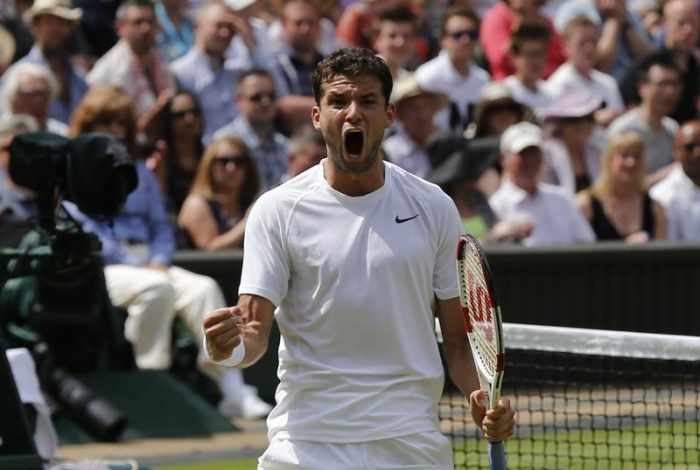 PHUKET: Grigor Dimitrov broke British hearts by ending Andy Murray’s reign as Wimbledon champion with a sublime and serene 6-1 7-6(4) 6-2 victory in the quarter-finals on Wednesday.

The third seed had confidently marched into the last eight without dropping a set, but his meek abdication on Wednesday left the Centre Court crowd, which included Prince William and his wife the Duchess of Cambridge, stunned into silence.

The man who had sparked wild celebrations around the country a year ago when he became the first home-grown men’s champion in 77 years, appeared to sleepwalk through a one-sided first set, threatened to fightback in the second and was simply outclassed in the third.

A forehand into the net handed Dimitrov the biggest win of his career and he became the first Bulgarian man to reach the semi-finals of a grand slam tournament.

The result ended Murray’s remarkable run of winning 17 successive matches at the All England Club, dating back to the 2012 London Olympics, as he bowed out in two hours and one minute.

“I am excited and just happy I got through that match in straight sets. It’s never easy coming to play Andy in front of a home crowd and I am just fortunate and happy,” Dimitrov said after preventing the British hero from reaching his sixth successive Wimbledon semi-final.

“As soon as we started warming up I sensed his game was not at the highest level and I was feeling good. I held my ground … the tiebreak was crucial. I went into the third set very positive.

“It’s tough when you know the person well outside the court and you have to face them. I have hopefully two more matches left and I am just focusing on that and trying not to get carried away.”

The 11th seed will next play either Serbian top seed Novak Djokovic or Croatian 26th seed Marin Cilic for a place in the final.