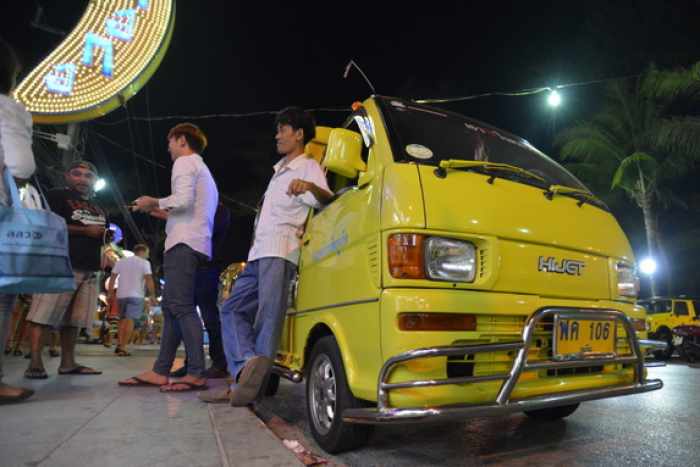 PHUKET: In the next step toward a more efficient and honest public transportation system in Phuket, officials plan to launch a call service for island taxis and tuk-tuks by mid-July.

“The first step was to pull down all of the illegal taxi stands in Patong. The next one is to plan how to organize all of the taxis that are already there,” Kathu District Chief Sayan Chanachaiwong told the Phuket Gazette this morning.

“Our goal is to set up a tuk-tuk and taxi call service for Patong, and launch it by July 15.”

All illegal taxi stands throughout the beach town were torn down last month (story here) as part of an Army-initiated purge of illegal, violent, abusive and cheating taxi drivers (story here).

Yesterday, more than 100 hotel representatives were present at a meeting spearheaded by Mr Sayan at Patong Municipality.

“We called in representatives from 120 Patong hotels to ask that they leave at least one space available where tuk-tuk or taxi drivers can park while on standby for customers’ calls under the new system,” said Mr Sayan.

“This will leave more parking spaces on the street for the public.”

After Mr Sayan proposed his ideas to officials and hotel representatives, a follow-up meeting was scheduled for July 9.

“Hotel owners will have time to think about the dedicated parking space idea. I asked for only one or two spaces from each of them,” said Mr Sayan.

“On Monday, we will call all of the hotels and ask how many spaces they have to offer. Then we will calculate the total and present the number in the meeting on Wednesday.”

Although unsure about the number of spaces that will be made available, Mr Sayan said he believed the hotels would cooperate.

“It seemed like most of the hotels were willing to spare a few spaces for taxis. However, in the case that a hotel cannot provide a spot, we will have them put up a sign that informs customers about the call service,” he said.

Mr Sayan said that officials would sort out all of the details for the new taxi system in the meeting next week, including where the taxis can drop off and pick up customers, where they are allowed to park while on standby and the final details of the call service.

Patong Traffic Police told officials in the meeting that they fully supported the plans for future taxi services in the party town. However, they added that there is still a lot to do before all the problems will be solved.

“Patong has about 400 tuk-tuks and 500 taxis. If all of the 120 hotels agree to provide two spaces for taxis, only about 240 parking spaces will be reserved. We still have to find somewhere for most of the vehicles to park,” Traffic Inspector Ekkarat Plaiduang told the Gazette today.

“Even though the illegal taxi stands have been pulled down, the problem has not yet been fully resolved. Drivers are still sitting by the road waiting for customers.”

Painting red and white stripes on the road, which prohibits parking, might be one option, he said.

“Creating more ‘no parking’ zones might be one way to prevent taxis from parking along the road. However, we will wait and see what Mr Sayan says at the meeting next week,” said Maj Ekkarat.

“We need a long-term solution to the taxi problem. Traffic police cannot do it on their own. We need the full support of the Patong Police and a commitment to enforce the laws for everyone, with no exceptions.”