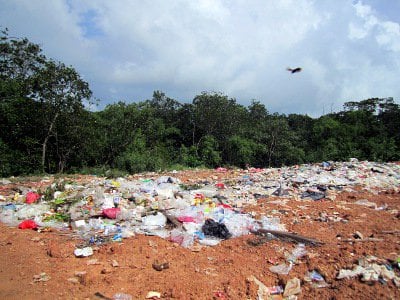 PHUKET: Now that the two municipal landfills on Koh Yao Noi are filled to capacity, villagers living on the island are demanding new solutions.

About 30 villagers on May 12 handed a letter of complaint to Mayor Somphol Roengsamut at the Koh Yao Noi Municipality offices.

The group said waste management had been a problem for years on the island.

Citing the example of Phuket, the residents are convinced that an incinerator is their best solution. However, unlike in Phuket, where the incinerator is located near the homes, school and workplaces of many people, none of the Koh Yao Noi villagers want to be near it.

The island’s two landfills – one behind the Koh Yao District Office on the west side of the island, the other in a mangrove forest named Klong Lo Moon on the east side – were ordered shut down earlier this month.

Many residents believe the closures were the result of the overwhelming stench they emitted, coupled with the considerable fees charged to dump there.

“Koh Yao Noi Municipality sent us a letter informing us of the closure of the entrance to the landfill behind the District Office, but they didn’t cite a reason for it,” said Nisanat Tintalae, the municipality’s chief administrative officer.

“Koh Yao Noi Municipality told us they couldn’t handle the smell and the waste disposal fees were too high,” said Mr Soonthorn.

“Five years ago Koh Yao Noi was awarded a budget of 60 million baht under a Royal Patronage project by HRH Princess Maha Chakri Sirindhorn to implement a permanent waste management solution… but nothing has ever been done,” he said.

Frenchman George Cortaz, 51, is director of Koyao Bay Pavilions. An 11-year resident of the island, he said, “For the past three to four years, the smell has become more and more of a problem. I wish the government would do something about it. When the tide is high, it sucks waste down to the water.

“Koh Yao Noi is well known, with a reputation for eco-tourism, but this problem is ruining it,” he noted.

Mr Soonthorn said a local degradation in water quality related to the landfill had affected the local community, most of which relies of fishing as the primary occupation.

“Besides this, water in the area causes people to itch upon contact,” he complained.

Mayor Somphol explained to the villagers in the meeting room that the municipality has been trying to solve the problem – thus far without success.

After surveying seven potential sites to build an incinerator, five in Village 6 and two in Village 7, they could not reach a consensus, he explained.

“Villagers there refused to have an incinerator built on their land, claiming they were not well informed,” he said.

“They misunderstood, thinking the incinerator would cause a bad stench like the landfill behind District Office,” he added.

Despite this, the municipality was scheduled to meet again to discuss the possibility of having a “temporary incinerator” built behind the district office, he said.

The incinerator under consideration would cost about two million baht and have the capacity to burn a tonne of rubbish per day, he said.

“However, it would take up to two months to get the incinerator ready for operation,” he noted.

“In the meantime, I will chair a meeting with the municipal council and seek to allow villagers to resume disposing of their waste behind Koh Yao District Office,” the Mayor added.

In regards to the royally-endorsed project, it was canceled after two years because the municipality was unsuccessful in its attempts to acquire suitable land, he said.

To build a permanent incinerator, the municipality needs two rai, he explained.

“…So if anyone has the land, we would be delighted to accept offers for consideration,” he said in closing the meeting.

Mr Soonthorn said the villagers wanted the board meeting to be an open one in order to ensure transparency.

“We are satisfied. The mayor has informed us the board will be meeting to solve the problem. The most important thing is that we are allowed to attend the meeting so we can be fully informed about the decision-making process,” he said.

Dems out in droves in Phuket