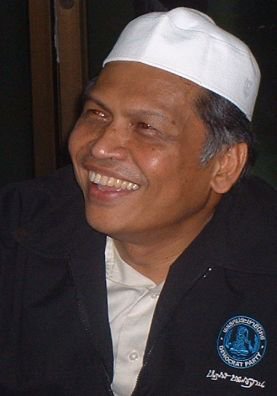 Surin Pitsuwan, Deputy Leader of the Democrat Party and a former Foreign Minister, made a speech in which he charged the Thai Rak Thai (TRT) Party with “buying” a former Democrat Party MP representing a province near Phuket.

The MP has announced that he will run as a TRT candidate in the upcoming general election.

K. Surin alleged that the price for getting the MP to jump parties was 40 million baht.

After K. Surin’s speech, an outraged Pichet Sathirachawal, the TRT’s Andaman Region Candidate Selection Chairman, took to the stage to refute the charge.

“That’s a lie,” he said. “The TRT has no policy of buying MPs from other parties. [The MP] joined the TRT solely out of a desire to serve [his province] better,” he said.

The TRT is confident, he added, of winning at least one parliamentary set in each of its five Andaman Region provinces – including Phuket.

“Our chances of winning come from the successful policies of Prime Minister Thaksin Shinawatra,” said K. Pichet. “People can see how the government’s work has improved their lives, such as by raising the prices of rubber and palm oil.

“I am responsible for Phuket, Phang Nga, Krabi, Ranong and Trang. I believe my party will win at least one seat in each of these provinces.”

K. Surin, however, slammed the government’s failure to resolve the violence in the three southern provinces of Pattani, Yala and Narathiwat.

“The failed policy stems from the government’s misperception that problems in the region were minor.

“This caused it to close government agencies such as the Southern Border Provinces Administrative Center, thereby losing an important body for understanding regional concerns and resolving disputes,” he said.