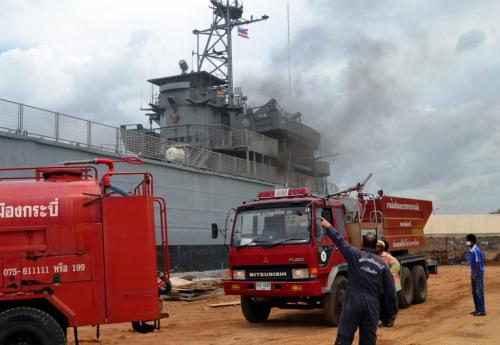 PHUKET: The decommissioned warship RTMS Lanta burst into flames yesterday while workers were repairing damage caused by a previous fire that broke out at the tourist attraction on July 3 (story here).

It took Krabi Provincial Administration Organization (OrBorJor) firemen about an hour to squelch the flames on the warship, which is a tourist attraction in Krabi Town.

Police believe that the fire started in the engine room on the second floor of the ship and then spread to the first floor.

“It is very possible that the fire was caused by a spark from welding being done on the second floor,” Krabi OrBorJor President Somsak Kittitornkul said. “The spark might have landed on the insulation foam, which is flammable.”

The blaze is estimated to have caused more than 100,000 baht of damage, Mr Somsak said.

“We will have to reiterate the importance of being careful to the construction team. We don’t want this to happen yet again,” Mr Somsak said.

Some local villagers, however, believe that careless construction workers were not the source of the fire. Some explained that the OrBorJor might have set up the ship museum without conducting the necessary prayers and letting resident ghosts know first.

Nonetheless, the HTMS Lanata, measuring 98 meters bow to stern, is expected to re-open to the public as a museum some time next year.