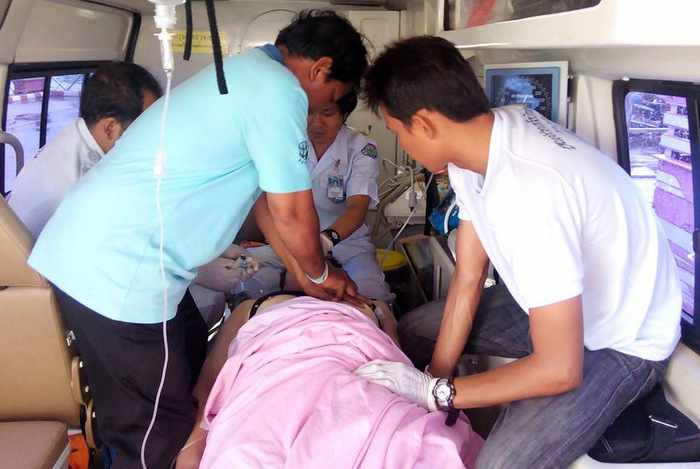 PHUKET: Police have confirmed that they are investigating the death of a Korean tourist who was pulled unconscious from the water while diving near Coral Island, off Phuket’s southeast coast, on Saturday.

Kim Sang Min, 47, had been in the water for just a few minutes when the guide saw him floating on the surface shortly before 10am.

“The tour operator rushed him by speedboat to Chalong Pier, where an ambulance from Vachira Phuket Hospital was waiting,” said Lt Thapanan Akaraguntarakorn of the Phuket Tourist Police.

The ambulance crew administered cardiopulmonary resuscitation (CPR) and a medical team at the hospital continued life-saving efforts, but were unable to revive Mr Kim. He was declared dead at 11:27am.

“[Mr Kim] was diving, not snorkelling,” Capt Patiwat Yodkwan, the Chalong Police officer in charge of the investigation, told the Phuket Gazette this afternoon.

“At this stage we believe the death was most likely an accident. However, we are waiting for the results of a post-mortem examination to confirm the cause of death.”

Marine Police Inspector Chatchai Sakdee confirmed to the Gazette that the Marine Police have no jurisdiction in investigating Mr Kim’s death.

“We are notified of any deaths at sea in the waters off Phuket as a standard procedure. I did hear about the incident, but the Marine Police have yet to be formally notified,” Lt Col Chatchai explained.

“Nonetheless, the primary responsibility for investigating fatal incidents on the water remains with the police station responsible for the area in question – which in this case is the Chalong Police.”

The boat* was chartered out to a tour company in order to provide a combined diving and snorkelling day trip.

The staffer declined to name the “third-party” company that hired the boat, citing legal reasons as the incident is under investigation.

The death of Mr Kim during the day trip on Saturday follows the death of 29-year-old Chinese tourist Ting Hong, who drowned while snorkelling off Racha Yai Island on April 19 (story here).

No flash flood warning for Phuket – yet