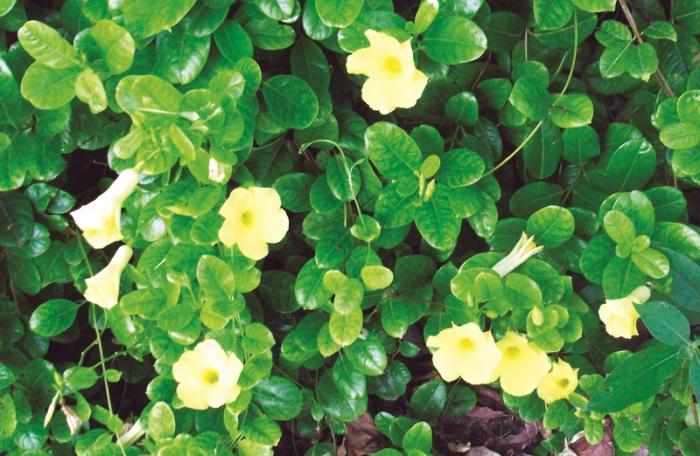 PHUKET: I am not talking about social climbers or even those intrepid fellows who scale up the sheer cliffs at Railay. Rather, I’m referring to two members of the vine brigade who have received less than their due footage in these columns.

I was reminded of the value of the garlic vine when I visited an estate, the common parts of which had been landscaped to mask unsightly concrete walls. Not yet in bloom, its foliage was already working away at the camouflaging process.

Mansoa alliacea has many merits. For a start it is self-supporting; the terminal leaflet is often modified into a tendril that clings to whatever is at hand. Moreover it has a profusion of deep lavender bell-shaped flowers with an attractive white throat. In the right conditions, these blooms appear at least twice a year. In fact, in my garden they seemed to bloom whenever exposed to the sun.

Furthermore, it is a very vigorous grower: my specimen, which developed a woody, two-inch thick stem, eventually reached 15 feet as it climbed into a neighboring devil tree. One important thing to be remembered is that the vine produces flower buds on new growth so it should not be pruned – as least if you want it to continue to bloom.

The climber possesses other unusual features which should endear it to any intrepid gardener. The crushed leaves smell like garlic, and can be used as a garlic substitute. Moreover, the entire plant has medicinal uses, especially for respiratory ailments and to alleviate fever. It can even be used as a mosquito repellent and is considered lucky. What more could you ask for?

Odontadenia is equally valuable as a climber, but much less well-known. Indeed I have only encountered it on one occasion, growing in a friend’s trellised roof garden where its habit was so profuse that numerous sunbirds were nesting in its foliage. It also hails from Mexico and I suspect its introduction to Asia is a relatively recent phenomenon.

Now beginning to gain recognition, it deserves to be better known in Phuket. The two-inch vivid yellow-orange flowers are bell shaped and are produced in great profusion – smaller but almost as spectacular as those of its relative, the allamanda.

Another close relative is called pentalinon luteum. It’s a bit different in that the striking blooms are invariably neon yellow. Just to confuse things, it is sometimes known as the yellow mandevilla. These flowers are produced, as with the garlic vine, at the stem tips. Given enough sun, it will bloom all year round. In common with the garlic vine, it produces tendrils, which are important if one wants a low-maintenance climber. The riotous foliage, sap-green in color, is a real bonus.

I currently have one, taken from a cutting, and growing in a pot: I will keep my fingers crossed when I transfer it to a wall-side setting – it’s too precious to lose.