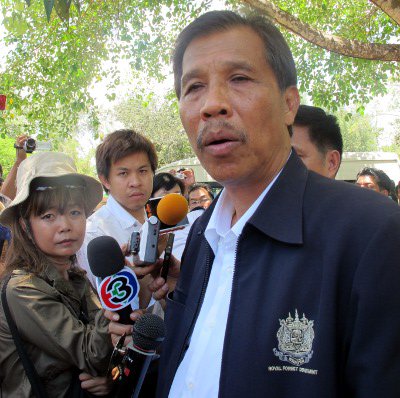 The raids started in the afternoon with Mr Damrong leading 10 teams of investigators brought in from 10 different offices of the Royal Forest Department (RFD) from across Thailand.

In total, 400 to 600 rai of land is under investigation, all bordering – or encroaching on – Phuket’s Sirinath National Park.

Mr Damrong refused to allow any officers from RFD office Phuket to take part in the raids.

The 10 teams simultaneously raided the 10 resorts, with Mr Damrong personally leading a team of officers from the RFD Chiang Mai office to inspect the boundaries of the Trisara resort, north of Layan Beach.

Mr Damrong asked to see the Chanote title deeds for the 140 rai of land that the resort is built on.

Trisara Human Resources Director Nares Srinark explained that he did not have the title deeds on hand, but said that he remembered that one Chanote title deed for the entire plot was issued in 1994.

To this, Mr Damrong replied, “The National Parks, Wildlife and Plant Conservation Department stopped issuing Chanote titles for land in this area after 1964. Any land that has a Chanote issued after 1964 we consider to be illegal.”

Mr Damrong said the Trisara management company, the Three Dolphins Company Limited (Trisara Resort), had 30 days to present to the Phuket Provincial Court documentary evidence to prove that the Chanote in question was legally issued.

“If the evidence provided is found insufficient to prove that the Chanote was legally issued, we will order the buildings [on that land] to be removed because it is on national park land,” he warned.

Mr Damrong has built a reputation, and gained the nickname “The Demolisher”, for taking the demolition of long-established resorts seriously. The nickname was bestowed after his order on July 28 for an estimated 3,000 DNP officers to demolish nine resorts deemed to be within the boundaries of Thab Lan National Park in Nakhon Ratchasima.

However, he is now facing an administrative inquiry into the demolition of those nine resorts. The results of the inquiry are due to be released within the coming week.

Among the other resorts, villa developments or management companies under investigation for allegedly encroaching on Sirinath National Park land were named in Thai as:

“All of the 10 resorts investigated today are now officially asked to cease all construction for 30 days [until the court rules on whether or not the resort is on legally acquired land].

“If any of the 10 resorts investigated today continue with any building, I will file for a court order to suspend all construction,” Mr Damrong said.