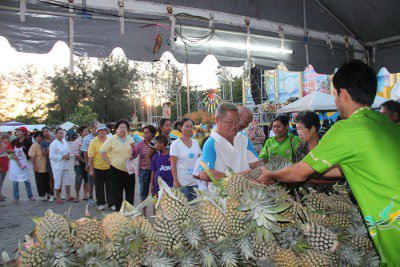 The fair kicked off at 5pm and continues through to August 22.

Phuket Agricultural chief Winai Khankaew explained to the Gazette, “It’s not just pineapples. There are all kinds of fruit, flowers and other agricultural products on show.”

Among the stalls are fresh produce and cooked food for sale, including locally grown coconuts, sator rice and organic agricultural products, as well as products made under the government’s OTOP (One Tambon, One Product) scheme.

There is also an exhibition of all forms of Phuket-grown pineapples – nicknamed in Thai slang as “having 1,000 eyes” – including the famed yanat, as it is pronounced in the local southern Thai dialect.

In addition to vendors selling a variety of fresh produce, the fruity festivities will include an agricultural product competition, a Phuket pineapple contest and a pineapple somtam competition.

Though produce and vendors have rolled in from neighboring provinces, the vast majority of people taking part are from Phuket, specifically Thalang, Mr Winai explained.