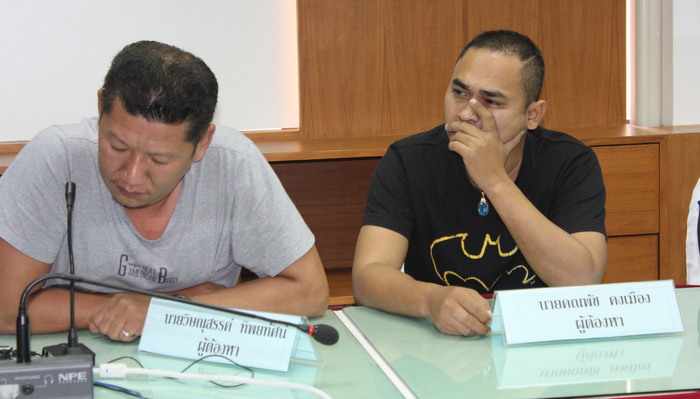 PHUKET: Two men have been arrested for posing as Department of Special Investigation (DSI) officers and extorting money from a Phuket Town massage parlor.

Wisanusan Thipayatuch, 42, and Kanapat Khongmuang, 38, were nabbed after extorting 100,000 baht in cash from the owner of Angel Massage in Phuket Town on April 24.

“The suspects, who posed as DSI officers, told the massage parlor’s owner they had video evidence that the premises was being used for prostitution and that he would be charged if he didn’t pay up,” Lt Col Korrawat Panprapakorn, director of the DSI’s Regional Center of Operations, Region 8, announced yesterday.

“The owner agreed to the payoff, because the tricksters told him he would be prosecuted if he didn’t hand over the cash,” Col Korrawat added.

However, after doubting the authenticity of the “officers”, the owner filed a complaint of extortion, and real DSI investigators quickly tracked down and arrested the two men at their Phuket homes.

“We believe there are two more suspects still at large who were involved in the extortion, but we are confident that they will soon be arrested. We hope the DSI’s image will not be tarnished by these con men,” Lt Col Korrawat told the Phuket Gazette.

“If any member of the public wants to lodge a complaint with the DSI about one of its officers, please do so. We don’t want the organization to be discredited by these suspects,” he added.