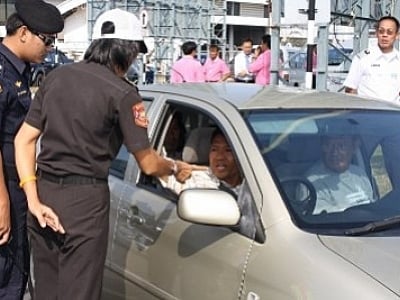 The news came at a meeting headed by Phuket Vice Governor Chamroen Tipayapongtada, who said the order will be signed into effect ahead of a report being submitted to Deputy Prime Minister Chalerm Yoobamrung.

The deadline for filing the report, which is to explain what action Phuket officials are taking to resolve problems involving illegal taxis and jet-ski rental operators, is September 1.

The chiefs of Phuket’s three District Offices have until next week to report to V/Gov Chamroen on the number of taxi ranks and taxis – legal or not – operating within their respective areas.

“Once this information has been reported to me, the Governor will sign an order giving illegal taxi drivers 15 days to register their vehicles with the Phuket Land Transportation Office [PLTO],” V/Gov Chamroen explained.

An officer from the PLTO told the meeting that, according PLTO statistics, there were 111 taxi ranks and 1,221 registered taxis operating in Phuket.

V/Gov Chamroen yesterday also ordered the PLTO to work with Phuket’s three District Chiefs and relevant local organizations in designing signs that will posted at all taxi ranks on the island showing the standard fares to be charged by all taxis.

“The signs showing the standard fares must be completed before the end of August,” V/Gov Chamroen said.

He added that all taxi drivers should be dressed in “polite” attire.

“The PLTO will set up three committees – one for each district: Thalang, Phuket City and Kathu – to follow up on progress in their areas,” V/Gov Chamroen said.

The move to tackle illegal taxis and jet-ski scams stems from pressure from as high up as the Prime Minister’s Office, V/Gov Chamroen said.

“Prime Minister Yingluck Shinawatra, the Minister of Interior, the Minister of Foreign Affairs and the deputy national security minister are now all directly involved in resolving taxi and jet-ski problems in Phuket because the government has received many complaints. For example, the British ambassador recently met the prime minister to discuss the problems with taxis in Phuket,” he explained.

The government is considering some measures to relieve the tensions and to support taxi drivers trying to make a living, V/Gov Chamroen added.

“The government plans to issue LPG and gasoline coupons to taxi drivers. Officials are now in the process of collecting information and the project is coming soon,” he said.

He added that the PLTO has set up a Thai-language hotline at Tel: 1584 to receive complaints about taxis in Phuket.

“The hotline will be announced to the public through local media, on the radio and television channels and in newspapers,” the vice-governor explained.

“We now have 286 rental jet-skis registered in Phuket. All of them now have first-class insurance and each jet-ski has a sticker showing a number that identifies who owns the jet-ski,” Mr Phuripat said.

Mr Phuripat explained that the “perfect result” was accomplished by working with local organizations and relevant offices. “And by holding ongoing discussions with people about how to solve the problems,” he said.

“We also contacted all Marine Offices in different parts of the country and asked them to not approve any transfer of jet-skis to Phuket,” he said.