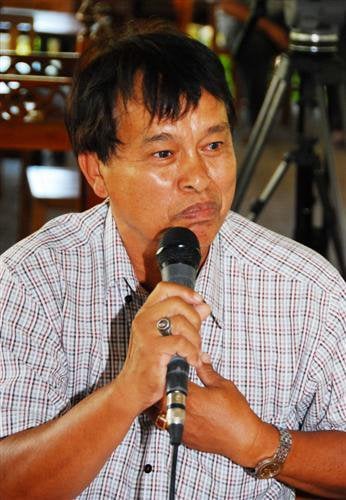 PHUKET: A new management team has expressed interest in taking over the rights to manage FC Phuket football side.

FC Phuket executives opened the table for any potential backers to take over the team by January 31, the “roll call” deadline for 2012 Thai Premier League (TPL) Division 1 clubs.

An official announcement was made yesterday at a press conference at the Mai Morn Seafood restaurant, near Phuket Bus Terminal 1 in Phuket Town.

Speaking at the press conference was current club president Narubas Aryupong and director Soranan Sanae, who announced their intentions to relinquish all rights to the team, effective from the end of the month.

The latest development follows Cournot and Nash Co Ltd (Muangthong United) withdrawing its offer of support for the club earlier this week.

Paitoon “Ko Men” Chutimakornkul, another executive of the club, was not present at the press conference, but instead sent a letter.

Those in attendance received copies of the letter, which expressed his resentment for allegedly being accused by some fans of “selling out” the team.

President Narubas Aryupong regretfully announced, “For three years I have managed FC Phuket. I think I have helped improve the football circle here a lot. From this point, I give up. I resign from every position, effective today [Friday].”

“After this, I will go back to work to pay for the three million debt I’ve accumulated from running FC Phuket. If anyone would like to continue running the team, please contact me directly at 084-2421688 before January 31. This is the deadline by which the team has to confirm its intention to compete in TPL Division 1.”

The next season begins in March.

“Frankly, I just cannot handle it anymore, I have run out of money,” he added.

Director Soranan Sanae continued, “We come as a package. If Ko Lek resigns, so do I. It is not that we don’t love Phuket, but we no longer have the energy or funds to continue.”

The executives also addressed accusations made by one group of fans about alleged misappropriation of sponsorship money, then selling out.

One accusation alleged that the loss to Chainat FC on January 14, the last match of the season, was fixed.

“We had only 13 players on that day, and have to accept that Chainat FC players were better,” Mr Soranan said.

FC Phuket decisively beat the Hornbills in their two previous encounters, both played at Surakul Stadium.

“We never sold the team during the entire three years we ran it. There were too many expenses, so we had to find new sponsors in order to support the team, until finally Muangthong United agreed to help us temporarily. Khun Rawi [head of Muangthong] had said we could get it [the management rights] back anytime,” he said.

The former managers would “surely” sue the owners of a website that had disseminated false accusations about them and posted other defamatory information though social networking site Facebook and YouTube, he said.

Their biggest portion came from the Phuket Provincial Administration Organization (PPAO), which contributed 17,146,600 baht to the team

Ticket sales at the gate, which were priced at just 50 baht all season, amounted to just 2.4mn baht, or 7 per cent of total income.

Despite the team’s apparently bleak future without PPAO support, one group stepped forward at the end of the press conference to express interest in taking over the team.

Identified as FC Two Heroines (FC Tao Thep), the group’s secretary Prawit Chantawong said “If we receive this opportunity, we are ready to run the team for Phuket people.

“We have already prepared staff and players for everything. We have [representatives of] Chonburi FC and Osotspa M-150 Saraburi as partners and we will be able to get Dusit Chalermsan, the former coach of Sriracha Suzuki FC.”

“If we can make a deal with Khun Narubas, we will hold another press conference to talk about our budget and plans,” he said.

At the end, Director Soranan said “We will give the team away for free. If anyone would like to manage the team, we are open to any offers,” he said.

Another press conference at the same venue would take place at 3pm on January 30, he said.