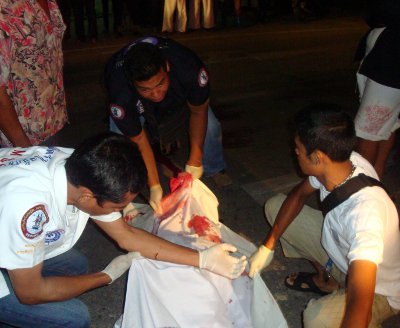 PHUKET: Both parents of a 4-month-old boy died last night after a hit-and-run driver struck their motorbike in Chalong.

The baby boy, who was also on the motorbike, suffered no serious injuries.

Lt Col Boonlert Onklang of the Chalong Police rushed to the scene with officers from the Phuket Provincial Administrative Organization tourist rescue center and Phuket Ruamjai Foundation rescue workers after receiving the report at about 8pm.

The officers arrived at the crowded scene, about 20 meters from the entrance to Soi Taied on Chao Fa East Road, to find the parents dead on the road.

Police have named the parents, both of whom were dressed in white for the Vegetarian Festival, as Surasak Chaichana, 21, and Roongnapha Pikulthong, also 21.

Officers found the baby boy crying, but uninjured, not far from the parent’s bodies. However, the infant was taken to Vachira Phuket Hospital for physical examination to ensure that there was no internal injury.

Witnesses told police that the family was riding on a black Honda Scoopy scooter southbound on Chao Fa East Road when a 10-wheeled truck struck the motorbike from behind and sped off.

The pair hit their heads on the road and died, witnesses told the police.

Quick action by police led to the arrest of the truck driver, named as Udom Sae-ied, 25.

Udom was charged for the hit-and-run, driving without a license and causing death by reckless driving.

The family was returning home from visiting a shrine in Phuket Town when the accident happened, relatives of the deceased told police.