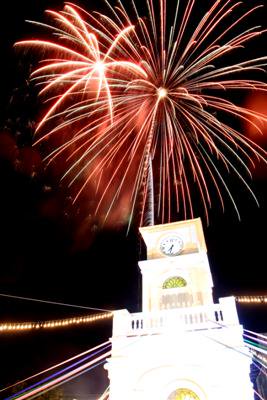 PHUKET CITY: Watch out Times Square, tropical Phuket has launched its most impressive New Year’s Countdown activity ever at Surin Circle, in the heart of Phuket City.

Mr Paiboon said the countdown activity will “absolutely” be an annual event and that the Surin Circle was chosen because of its central location.

A huge digital clock has been set up at the circle to count down the hours, minutes and seconds until the arrival of 2009.

The festivities, now in their fifth day, run daily from 7 pm to about midnight – except on the last day, when activities will run into the early morning.

To accommodate all the booths, stages and large beer garden all set up at the clocktower circle, a one-way traffic system is in operation from 6 pm onward that makes Phuket Rd one-way heading north. Southbound traffic needs to use Montri Rd then continue along on Soi Surin, in front of The Metropole Hotel.

Public parking is along Soi Talingchan, which runs northwest from the circle and is also restricted to one-way traffic flow, heading away from the roundabout.

Tonight’s entertainment, which kicks off at 7 pm, includes a show called The Color of Travel and several music competitions in different genres. The show ends with a prize-giving ceremony beginning at 10:50 pm.

Sponsors of the event include beer companies, whose hostesses are always at the ready to keep revelers’ glasses full and their spirits high.