PHUKET TOWN: The Phuket Provincial Administration Organization (OrBorJor) has set up a new P.O. box to receive comments and questions from local residents. Dr Prasit Koysiripong, president of the OrBorJor, told the Gazette that the purpose of the new P.O. box is to make it easy for people to ask questions or make suggestions on how to improve Phuket. “Every opinion will be useful to the OrBorJor. We will take peoples’ advice and try to combine it with our plans. But please keep in mind that some problems are very complex and may take time to consider, so we ask that people be patient. “Letters from foreigners are also welcome, but writers should not forget to include their name and address so that we can send a response. If a question or comment relates to an area outside our responsibility, then we will make sure to send it to the appropriate authority,” said Dr Prasit. Anyone wishing to ask questions or express an opinion can write to OrBorJor, P.O. Box 29, Phuket 83000. 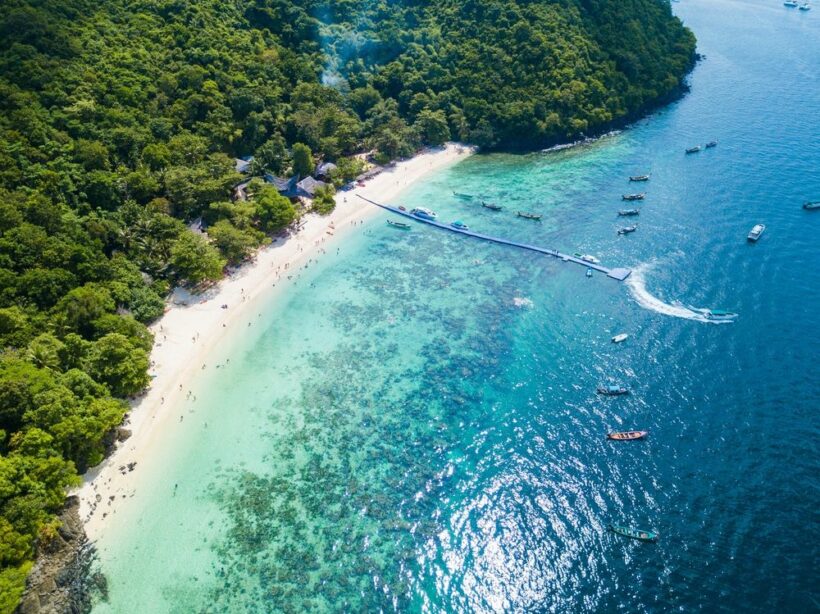 Phuket is open. Sort of. And the hotels on the island are officially allowed to re-open but few are flinging open their doors anytime soon to welcome the hordes of tourists lining up to book a room. The holiday island is in a Catch 22 situation with the hotels waiting for the guests to return and potential visitors waiting until there are signs of life.

Although the authorities said hotels could re-open on June 1 they forgot to give hotels any advance notice so management could put all the many wheels in motion necessary to open a modern hotel.

A hotelier told TTR Weekly the first he knew of the lifting of restrictions was when he received a message on his phone saying the province had announced the island’s hotels could reopen.

But opening up the hotels is just one small step to re-booting Phuket’s battered tourist industry.

What are the guidelines for quarantine, if any? Do guests require any specific documentation? Insurance? Which hotels are actually open? Who is co-ordinating the information? Do travellers get any information about these things when they make their bookings? How do travellers know the hotel’s open anyway?

And if travellers come to Phuket, then return to their province. will they be required to do 14 day quarantine, as required by some provinces?

For now, the only way you can get to Phuket is across the Sarisan Bridge, the only land link to the Thai mainland. The island’s marine piers are also open again but there are scant services running at the moment.

There has been no official announcement about the re-opening of Phuket International Airport, even for domestic services. The island’s provincial authorities applied to the Civil Aviation Authority of Thailand last week to re-open the airport but there has been no official response. Many other airports have now re-opened around Thailand to limited domestic flights but the success of the domestic flights reboot has been sketchy with schedules constantly changing as airlines battle with the ‘new normal’. Passengers are also describing the whole process as a “hassle’ with longer times needed to get into the airport, through check-in, requirements for social distancing and the completely impersonal flight experience with flight crews dressed up like ICU staff.

But there are signs of life. Maybe Thai AirAsia, Nok Air and Vietjet Air know something the rest of us don’t. All three have bookings available, at least between Phuket and Bangkok, from June 16. Fares range from 1,100 up to 1,700 in the week after June 16, one way. But if you’re rushing to buy a ticket, on or off the island, be aware that there is no official green light for a resumption of flights, as of today.

International flights into Thailand are banned up to at least the end of June with, again, no official mention of what will happen after that. Residents of which countries will be allowed to fly in? What restrictions and conditions will be imposed? And which airlines are going to be flying anyway?

The CAAT has extended the ban on international flights twice already.

The Thai government said last month that they were going to use June as the month to clear a lot of the chartered Thai citizen repatriation flights. That the only new cases of Covid-19 in Thailand over the past 2 weeks have been returning citizens, all from Middle East countries, will be a niggling concern for authorities as they figure out how, or when, to re-open international borders.

Even if the hotels are re-opening, where will these magic travellers be coming from. The biggest feeder market, weekenders from Bangkok, will be going to Pattaya or Hua Hin. They’re unlikely to take a 12 hour drive to Phuket, no matter how cheap the hotels, or pretty the beaches. So as long as Thailand is closed to international tourists, and the airport’s sealed off from international travel, the prospects for Phuket’s hotel industry remain extremely limited.

Even if some domestic tourism provides a kick-start to the island’s tourist economy, what will they do when they’re here? All the hot spots are ‘cold’, there are few tours that are considering re-starting for now and it’s wet season anyway.

Speaking to the GM of three hotels on the island, he told The Thaiger that they’re not re-opening until October, at the earliest.

“There are plenty of difficult months ahead with our old staff mostly laid off. When we re-open, many of the staff will be new. The whole things a mess.”

Any bets on June 16 for a re-opening of Phuket Airport to domestic flights? 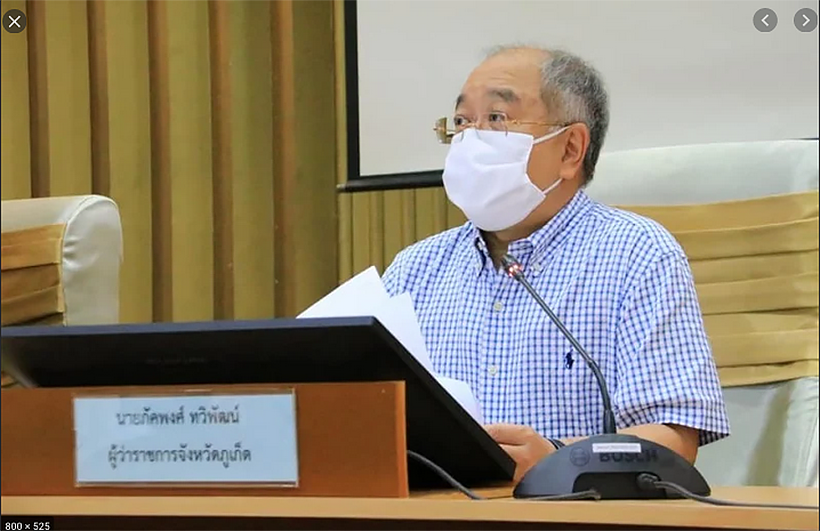 “I would like Phuket to organise activities leading the consulates from various countries to travel to Phuket in order to see the beautiful tourist attractions and to promote tourism for Phuket.”

Phuket’s governor called yesterday for foreign envoys to visit and inspect Phuket for themselves as a mark of confidence that the island is ready to receive tourists. The call came at a meeting at Phuket Provincial Hall attended by consuls and dignitaries from Australia, Luxembourg, Russia, Korea, Netherlands, Switzerland, France, England, Austria, Mexico, Estonia, Finland, Chile, Norway, Germany and Denmark. The meeting was held to discuss and receive opinions and feedback on Phuket’s development and direction in the aftermath of the Covid-19 outbreak, according to a report from PR Phuket.

Governor Phakaphong Tavipatana pointed out that Phuket has recorded 227 confirmed cases of people infected with COVID-19. Its tourist industry, the island province’s economic backbone, has been devastated, as the province has the highest number of cases per capita in the kingdom. The PR Phuket report didn’t mention that 3 people in Phuket died as a result of the virus.

“No people are currently receiving medical treatment in hospital and there has not been a confirmed case for 10 consecutive days.”

The governor stressed that the central government has allocated a trillion baht to the nation’s recovery of the country amid the fallout the pandemic: 45 billion baht for public health plans, 555 billion for relief measures, and 400 billion for social and economic recovery framework. He also pointed out that Phuket officials have facilitated more than 2,827 foreign tourists in Phuket returning to their homes in 24 countries.

The consuls and dignitaries at the meeting thanked Phuket officials for their assistance in helping foreign tourists return home, according to the PR Phuket report. It added that “In terms of feedback about visitors returning to Phuket post-COVID-19, the general consensus was that tourists still have confidence and will want to travel to Phuket again when the situation is normal.”

The governor gave special attention to medical tourism, and to a proposal that would allow medical tourists extended stays in Thailand once international arrival restrictions are lifted.

“As for the proposal, which would like the Ministry of Foreign Affairs to provide assistance regarding a permit to stay in Thailand for more than 30 days in the event that foreign tourists come to use medical services in Thailand, those involved in the medical industry can work with the Phuket Passport Office to submit the proposal to the Ministry of Foreign Affairs for further consideration.”

Chon Buri and Hua Hin aren’t the only places reopening their beaches. Today, Ao Manao, the scenic beach in the western province of Prachuap Khiri Khan will also be open to the public. The crescent shaped bay belongs to the Air Force Wing 5 miltary base. Like all Thai beaches, it’s been closed for two months due to the Covid-19 pandemic. Since Monday, the beachfront Fa Chom Kluen hotel has been available for booking for overnight stays. The beach will also open for swimming.

The reopening of Ao Manao is in contrast to the beaches in neighbouring Phetchaburi province, where an official announcement from the provincial governor allows all beaches including the popular Cha-am beach to reopen, but no swimming or watersports. The governor instead allowed food vendors and other service providers, including those who provide horse riding and beach chairs, to resume business.

In Chon Buri, on the east coast of the Gulf, all beaches in the Pattaya area have been open since June 1. But group activities like beach volleyball, jetskiing and banana boat rides are still not allowed. Those who offer beach chairs for rent must follow social distancing rules by placing the seats at least 1 metre apart, otherwise the service will be suspended. A violation could result in up to a year in prison and/or a fine up to 100,000 baht.

In Phuket, residents can still just look, but not go on, their famed beaches. Hotels have been given permission to open again on the island but few are bothering with the costs and expense as there are few people available to fill rooms. Phuket’s airport remains closed although June 15 is being widely tipped, but not confirmed, as the date for re-opening to domestic flights.

Scheduled international flights are still banned until at least the end of June.

In a related development, interprovincial bus operator Nakhonchai Air resumed its services Monday. Travel restrictions under the Emergency Decree had previously banned all trips of more than 300 kilometres.

The company is implementing social distancing rules by allowing passengers to sit only in window seats. Passengers must wear masks all the time and must check in and out before and after boarding the bus by using the Thai Chana app.

Monkeys drown in water tank after food and water shortage