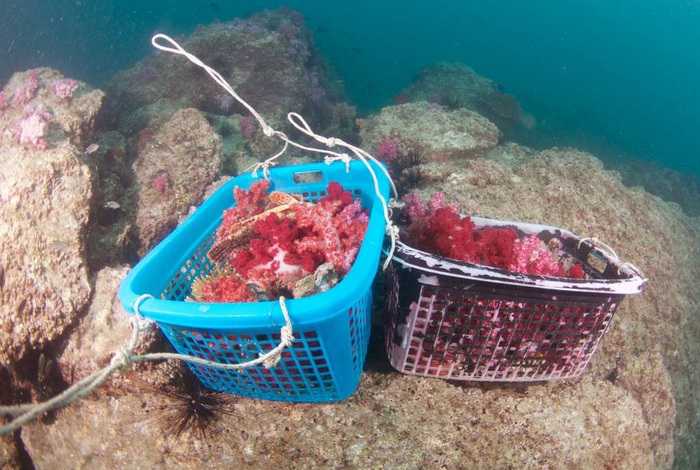 “Quick action is necessary to clamp down on corals being stolen from marine national parks, because the criminals behind the work move rapidly,” Mr Tanet said. “They have to be fast if the corals are to be taken from the sea and delivered to the mainland.”

The department’s call for help in cracking down on the marine pilfering came after Andrew Hewett, the owner and manager of The Adventure Club on Phi Phi, posted photographs on Facebook of corals collected in baskets that were left underwater.

In the two baskets found at Hin Moskito, within the Phi Phi marine national park, were species of acropora, tubestrea and soft corals suspected of being gathered to be sold to private aquarium owners.

“This is the first time that I have seen corals in a basket that were not collected for research purposes. Generally, coral harvesting is not an apparent problem at most of the Phi Phi islands, although I believe it may be a problem for corals at this location, since divers or snorkellers never use this site,” Mr Hewett told the Gazette.

“Without a physical presence [such as national park rangers] to monitor activities such as this, and to administer penalties, coral reefs will deteriorate beyond the point of self recuperation.”

Mr Tanet concurred that coral poaching was an issue.

“I can’t deny that there are still people illegally collecting corals in the national parks. However, people shouldn’t be mistaken and think that we are ignoring this problem,” Mr Tanet said. “We have our officers, as well as local networks, who help us remain vigilant. Nonetheless, we could use everyone’s help – the more eyes we have, the harder it will be for them to hide.”

Those witnessing coral poaching are asked to contact Mr Tanet directly on his mobile at 076 393-566.

The poaching, however, is only the tip of the pinnacle of problems plaguing Phi Phi archipelago’s shallow-water reefs, said Mr Hewett.

“Phi Phi islands are subject to high [volume] boat traffic coming from the mainland, and speedboats only use anchors as a form of mooring, [even when a mooring buoy is available],” Mr Hewett said.

“If one speedboat drops its anchor five times in one trip, how long will 100 speedboats a day take to completely destroy the shallow water corals around the Phi Phi islands?”