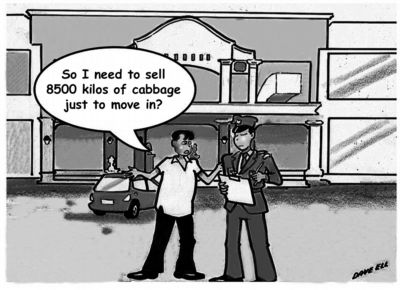 PHUKET: Pressure is mounting on Phuket City Municipality to reach an agreement with 425 market vendors who have been waiting almost three years for completion of the new fresh market on Ranong Rd. (See story in the current issue of the Phuket Gazette. Digital subscribers click here.)

Most of the vendors have been operating at a temporary market on Wirat Hongyok Rd since mid-2007 when the city asked them to leave the rat-infested Ranong Rd facility that had been in continuous operation there (opposite Thai Airways) since World War II.

The municipality’s plan to clear the old market and replace it with a modern, hygienic one was laudable, but changes on this scale seldom come without difficulty.

Vendor complaints about forced relocation from the original site date back to 2003 when plans for the project were first announced. Then, some 150 traders – including unlicensed vendors operating on the public roadways until 5am every day – were forced out of the area.

Nostalgia aside, few who remember the state of things around Suriyadej Circle at that time would ever choose to return to it. The municipality’s decision to clean up and improve traffic flow in the area was in fact long overdue, and a critical step in the ongoing transformation of Old Phuket Town into a genuine tourist attraction.

Chief among the vendors’ current complaints is that the municipality spent 167 million-baht in taxpayers’ money for construction of the new market and that this amount should have included provision of vending stalls.

The 167-million-baht price tag does indeed seem high for a market. But before making knee-jerk cries of ‘corruption’ skeptics should take a tour of the building, which has many facilities seldom associated with wet markets: rooftop parking, air-conditioned meeting rooms, large service elevators, wastewater treatment facilities – even a Muslim prayer room.

While the Gazette of course sympathizes with vendors who cannot afford to pay, the reality is that this final phase of the project is funded on money borrowed by the municipality. It needs to be repaid.

Phuket City Mayor Somjai Suwansupana has also reminded the vendors that they were allowed to operate from the temporary market free of charge for close to three years and were encouraged to save as much money as possible during that time.

Those who did so will be rewarded with long-term leases on space in what promises to be not only a major tourist attraction, but also the new heart of Old Phuket Town.

What is needed now is clear communication and a genuine desire to find a solution fair and feasible for both sides.