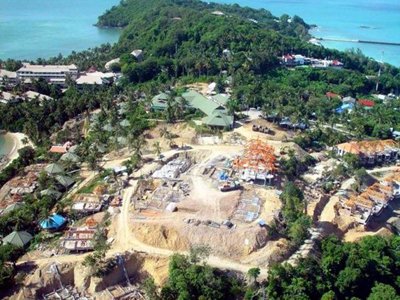 PHUKET (The Nation): Massive land development in Phuket province will be strictly controlled by environmental regulations after findings that large amounts of sediment caused by construction has destroyed a large area of coral reefs and marine ecosystems.

Over 250 square kilometers of coral reef surrounding Phuket’s Tang Khen Beach had been covered by a massive amount of sediment from land development, according to a study by Phuket Marine Biological Center.

It said that previously over 250 rai of coral reef at the end of Cape Panwa’s Ao Tang Khen was alive. However, coral reefs, particularly staghorn corals, had been totally destroyed. It was now covered by a large amount of sediment – from the seaport and building of three hotels in the area.

There has been massive land development in coastal areas of Phuket over the past five years, especially western beach areas such as Patong, Kata, Karon and Kamala.

The large number of building and land projects would hit marine resources, particularly coral reefs around Phuket province, which is a top destination for tourists around the world.

Niphon Pongsuwan, a coral expert who conducted the study, said he was worried about the removal of vegetation in mountainous and coastal areas, which would accelerate the amount of sediment flowing into the sea, harming reefs and aquatic animals and plants.

His team is now monitoring the changing of coral reefs and marine ecosystems, especially in “at risk” areas such as Patong, the north of Kata, the eastern part of Phuket, and Koh Rad. An evaluation will be conducted every six months. Preliminary investigation results have found that staghorn coral can no longer live there due to the changing marine ecosystem.

Boonchop Sutthamanaswong, Director General of the Marine and Coastal Resources Department, said he had had many complaints about land development and the building of resorts in coastal areas like Laem Singh beach in Phuket. The construction had released sediment, including sand and cement, into the sea and affected coral reefs and seagrass.

“Many resorts and hotels are now being built in the mountains near coastal areas reserved for the tourist industry. These land development projects are affecting the marine ecosystem. We could not see the impact in the short term but in the long term, these marine resources will be totally destroyed,” he said.

To prevent further damage to marine resources, Boonchop said his agency would talk with the Office of Natural Resources and Environmental Policy and Planning about stricter controls under the Environmental Impact Assessment (EIA) for land development near coastal areas. He will also ask local authorities to follow regulations under environmental protection announcements to reduce the impact from land projects on the marine ecosystem.