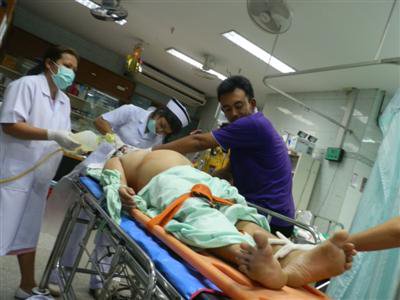 PHUKET: A man is in critical condition after his motorbike was hit by a car at a u-turn on Thepkrasattri Road in Phuket early yesterday morning.

Thalang Police were notified of the accident just after midnight.

Arriving at the scene, the northbound lane of Thepkrasattri road about one kilometer south of the new Tesco Thalang shopping mall, they found Apichet Chulanont lying unconscious near a badly damaged motorbike.

Phuket Kusoldharm Foundation workers put the victim on a backboard, gave him oxygen, and rushed him to Thalang Hospital. He was later transferred to Vachira Phuket Hospital.

The other party to the accident, a man driving a new Chevrolet SUV vehicle, told police he was driving northbound with a female companion when the motorbike driver suddenly pulled out from the Ban Nai Khlam u-turn, the site of many serious accidents over the years.

The man said he had no chance to brake in time and hit the vehicle hard.

The force of the impact was enough to seriously damage the front bumper of the heavy vehicle.

Rescue workers said the victim was unconscious and having difficulty breathing, but appeared to have been spared broken bones or visible head trauma – despite the fact that no crash helmet was found at the scene.