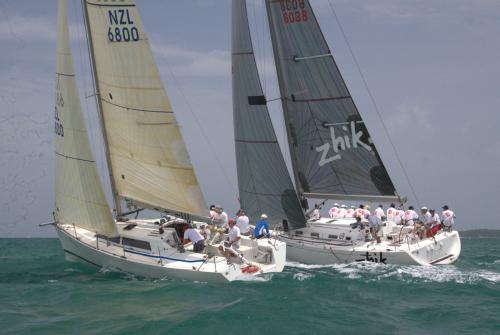 PHUKET: Lightairs beckoned on Day Three of Cape Panwa Hotel Phuket Raceweek, but by starttime a solid 10 knots was blowing and Principle Race Officer (PRO) Simon Jamesgot the fleet underway on time yesterday. A single race was in order for IRCCruising and the Classic classes, while the rest enjoyed the solid breeze tocomplete two races. The wind held throughout the schedule, but the shiftscombined with lumpy seas made for challenging racing conditions.

A groundingoff Lone Island for the crew on Sail inAsia Venture, who were subsequently pulled off by the media corps, didn’tdistract from the day’s racing with a number of boats cementing theirsuperiority and extending their undefeated runs, while in other classes mereseconds separated the podium places.

The TP52 Oi!, formerly Team Premier, being raced for the first time by new owner PeterAhern, has sailed a solid regatta so far with crew work improving race-by-race.Six wins from seven races leaves them in a strong position at the top of thestandings, four points clear of the Reichel-Pugh 45 Katsu (Ben Copley) who scored two more second places today. Themodified GP42 Wan Ma Rang, despiteagain placing third, have been pushing Katsuall the way and yesterday were just seconds behind on corrected time.

IRC Racing IIwent to script with Australian Peter Sorensen extending his lead on Fujin with two more wins yesterday. Theysit on five points, eight clear of the second placed boat. While Fujin is dominating the front, second tofourth are separated by just five points and the racing is close.

StuartWilliamson’s Skandia Endeavour of Whitbyhave put in some good performances so far with a string of second places, buttoday suffered from an on course sides (OCS) in the first race and fell off thepace finishing 6,3 on the day. They hold onto second overall ahead of Phoenix (Neils Degenkolw) whose 2,4keeps them in contention in third place, just one point behind.

Despite beingthe smallest in the fleet at 23-foot, and racing in the largest class of 11boats, a third yesterday for Sansiri’s OohLa La gives them a six point lead over their nearest rival and a cushiongoing into today.

Twin Sharks leading the Fireflys off the startline on Day 3 of the Cape Panwa Hotel Phuket Raceweek.

In theMultihull Racing class, the pattern was much closer, with erstwhile leaderAussie Alan Carwadine maintaining his lead on eight points with a 2,1. They sitone point ahead of Mark Pescott’s DaVinciwho seem to favor the longer courses and 10-12 knot wind range, scoring 2,1 yesterdayand bringing them up the rankings to sit in second overall.

However, you can’trule out John Coffin’s Java. Despiteleading early in the Series struggled yesterday with a 4,3, but are placed justtwo points back and are in a position to still make a push for the top of thepodium on the final day today.

The last day of racing is underway today.

The Phuket Gazette, PGTV, and the nationally televised ‘Phuket Today’ show are proud sponsors of this annual landmark event. Phuket Today is broadcast daily on True Visions, channels 99 and 58.