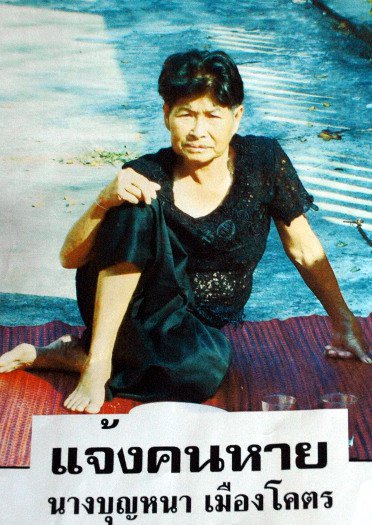 PHUKET: A civil servant in Nakhon Ratchasima is appealing to the public for help in finding his mother, last seen in Phuket in early June last year.

Kriengsak Muangkod, the Director of Bureau of Rural Roads Region 5 Office in Nakhon Ratchasima, said his 65-year-old mother Boonna Muangkod was last seen at his niece’s home in Karon on June 3 last year.

She was originally scheduled to travel back to her native Mukdahan province, in the northeast of Thailand, on May 11, he added.

The search for Mrs Boonna followed a request by the Office of Social Development and Human Security in Nakorn Ratchasima to Phuket Vice Governor Sommai Prijasilpa, who informed the Phuket Provincial Public Relations Office

Searches in both Phuket and Mukdahan have thus far been fruitless and Mrs Boonna has now been unaccounted for for eight months.

She was last seen wearing blue pajamas with a white-floral pattern. If anyone sees a woman resembling Mrs Boonna who walks with a limp and speaks with a northeastern dialect please call 081-5929212 or 083-9057013.

Anyone providing information that leads to locating Mrs Boonna will be rewarded.

Leads can also also be phoned in to the Phuket Office of Social Development and Human Security at 076-212726.