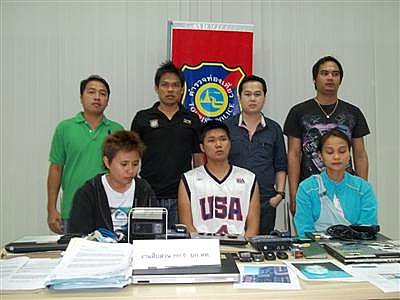 Nakkaphan Phota of the regional Tourist Police office in Phuket Town told the Gazette yesterday that all of the suspects were foreigners.

Following a tip-off from the Crime Suppression Division in Bangkok, three suspects were arrested on Saturday and charged with “fraud and the import of illegal computer systems containing false information,” he said.

The three were identified as: Aubry Pengson, 31; Sarabeth Servit, 31; and Henry King Lee, 28. All are listed as Filipino nationals.

Lt Col Nakkaphan said both Miss Aubry and Miss Sarabeth were previously arrested on similar charges by Wang Thong Lang District Police in Bangkok, then released on bail. They moved to Phuket and went to work for a British man named Paul Antony Barret, who set up an office at 246/3 Phang Muang Sai Kor road in Patong, Phuket, he said.

Seized as evidence from his premises was one desktop computer, five laptops, a bank book, ATM card, one telephone, and eight mobile phones.

All three suspects admitted they were employed by Mr Barret, whose current whereabouts are unknown. Police are searching for him, but fear he may have slipped out of the country.

“This call center gang defrauded people by posing as investment brokers over the phone. They invited people to invest in commodities like gold and oil stocks. They made their operation appear legitimate by referencing an existing website hosted abroad,” he said.

“People who believed [in them] transferred funds. Many people have fallen for it, resulting in losses of over 20 million baht. Most of the unfortunate victims are foreigners, many of whom have contacted the British Embassy regarding the case,” he added.