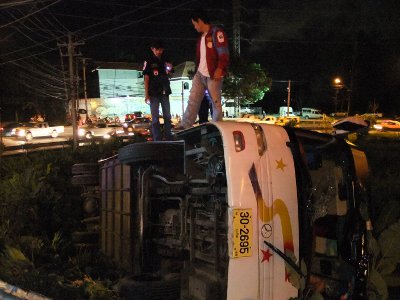 PHUKET: More than 10 Chinese tourists were injured as a tour bus ran off the road on Patong Hill yesterday evening.

Tung Tong Police were notified of the crash, at the bottom of the hill near the Kathu Shooting Range, at about 7pm.

Police arrived at the scene to find a tour bus lying on its side beside the road.

Rescue workers were already in the process of transporting 13 Chinese tourists and a tour guide to Patong Hospital.

A 35-year-old Chinese woman was reported as having the most serious injuries, as she was removed from the accident scene with blood running from her ears. The rest of the tourists taken to hospital had only minor injuries.

The bus rolled down the hill backwards and then off the road at the curve at the bottom of the hill, coming to rest on its side.

The Phuket Gazette notes that it is common practice for police in Phuket to charge drivers in any accidents with at least a minor charge while the police investigation is still underway.