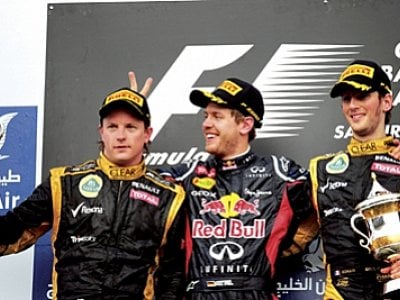 PHUKET: This season seems to be a battle of the pit-lanes, with McLaren leading the pit-boo-boo stakes, but several other teams are trying hard for this inglorious title.
However, McLaren kept ahead in Bahrain.

The wear on tyres was anticipated, though some teams, and in particular Mercedes, did better than expected. That is something to watch during the rest of the season.

Bahrain was a nightmare for McLaren. Lewis Hamilton suffered two horrible pit stops, which cost him thirteen seconds and eight places, and robbed him of his podium points coming home in 8th place.

Jensen Button had an exhaust failure, a puncture before finally a differential failure caused him to retire. So McLaren slumped, not on the track, but in the garage. Their pits have squandered their early season advantage, as every team now has the chance, within the FIA rules, to test an upgrade before the next race.

Bahrain was dreadful for Williams too. Pastor Maldonaldo spun off with a blow-out, and teammate Bruno Senna finally parked his car with severe vibrations, though he was never in the points.

Mercedes faded back from the limelight. Nico Rosberg came 5th and was lucky to avoid the censure of the stewards over his defending tactics.

Michael Schumacher looked unimpressive and came in 10th for the last point. He would not have got that, but Sauber messed-up Perez’s pit stop and lost them the place.

Ferrari was mediocre as expected, with Fernando Alonso getting 7th place.

At least Felipe Massa got 9th place, his first points of the season and enough to keep his seat, at least for now.

Red Bull became the fourth team in four races to win. Sebastian Vettel won and Mark Webber came in 4th. It was almost a perfect day.

Vettel was firmly instructed by his engineer to park immediately after the chequered flag, and walk back to the paddock, so clearly the car had given everything it could. Several cars were in similar condition.

Lotus had a dream day too, taking both 2nd and 3rd places. Kimi Räikkönen took second place and might even have challenged for the win if he had not lost so much time fighting team-mate Romain Grosjean, who came in third. Kimi benefited from not making Q3, and thereby saving an extra set of tyres for the race.

Paul di Resta two-stopped to come 6th for Force India, managing to hold off the attentions of Alonso.

The leading drivers of the season are now Vettel, Hamilton, Webber, Button and Alonso. But four or five others are snapping at their heels.
In the Constructors Championship Red Bull and McLaren are well clear of the others, for now.

We now have six teams in the running, and a chance to test new equipment before the Catalunya Grand Prix on May 13.