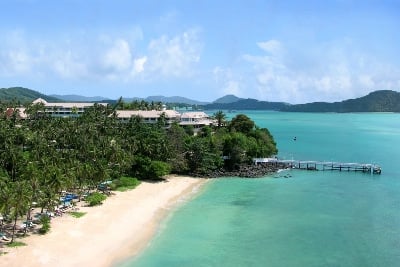 PHUKET: The organizers of the Phuket Raceweek 2012 today announced that the host venue of the annual regatta this year will be the Phuket’s “Grande Dame” the Cape Panwa Hotel and sister property the Kantary Bay Hotel.

“Cape Panwa Hotel and its sister property, Kantary Bay Hotel, on the tip of Cape Panwa in the southeast of the island, will give us the opportunity to lift the standards of Phuket Raceweek even higher than before, while introducing some welcome new elements – such as Cape Panwa Hotel’s stunning beach and beachside gardens,” said Grenville Fordham, managing director of event organizer Image Asia.

“This agreement means that we continue to race in the same waters in and around Chalong Bay that are so popular with regatta participants, that we keep our signature ‘one regatta, one venue’ format – and that we have security of venue beyond 2012,” he added.

Mr Fordham said the Cape Panwa Hotel deal is testimony to the attraction of Phuket Raceweek as a commercial sponsorship platform.

“This is not a charitable deal. Cape Panwa Hotel owners, Kasemkij Hotels, have taken a commercial decision and expect a return on their investment. We’ve spent the last few months ironing out the details with their senior management to ensure that they, the regatta organizers, the participants and other sponsors all get the value they should expect,” he said.

Tirawan Pangsrivongse, Kasemkij Hotels’ Project Development Manager, said, “We’re excited to be partnering with one of the region’s top regattas as it goes into its ninth year. Sports tourism is the fastest growing sector in the global travel and tourism industry and Phuket is the sports tourism center for Thailand.

“Leisure yachting and yacht racing are at the pinnacle of high-end sports tourism and this new partnership is a perfect fit with our position in the market. We look forward to showcasing our two Phuket properties, Cape Panwa Hotel and Kantary Bay Hotel, to regatta participants and associated media this July,” he added.

Today’s news follows the confirmed return of worldwide regatta sponsor Mount Gay Rum, who used the 2011 Phuket Raceweek regatta as their platform for their entry into the Thailand market.

After the huge success of their 2011 participation, they have increased their investment this year, returning as Presenting Sponsor.

Participants or guests wanting to book accommodation at either Cape Panwa Hotel or Kantary Bay Hotel can make bookings through the regatta website (click here).

The Phuket Gazette, PGTV and The Nation are proud sponsors of Phuket Raceweek.