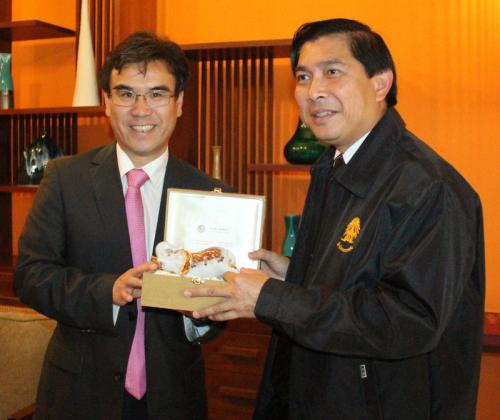 PHUKET: Chinese officials confirmed that a consulate in Phuket will be operational by next year in order to cater for the dramatic increase in Chinese nationals visiting the island.

“The plan to establish a Chinese consulate in Phuket has been approved. However, we still need to find a place for it, as well as personnel,” the Chinese Consulate General in Songkhla, Zhang Jinxiong, told Phuket Governor Maitri Inthusut at a meeting this morning.

“Having a consulate in Phuket is necessary. As we know, Phuket welcomes a lot of Chinese tourists to its shores. With more people arriving every year, there simply will be more problems that need to be taken care of,” Mr Zhang said.

“We want to be close to our people, so we can support them while they are travelling in Phuket,” Mr Zhang told the Phuket Gazette.

Mr Zhang encouraged all Chinese tourists planning a trip to Phuket to check the government website for news and travel information. Additionally, he warned tourists against swimming in no-swim zones, which are clearly marked with red flags by Phuket lifeguards.

“It is very dangerous to ignore the red flags,” he said.