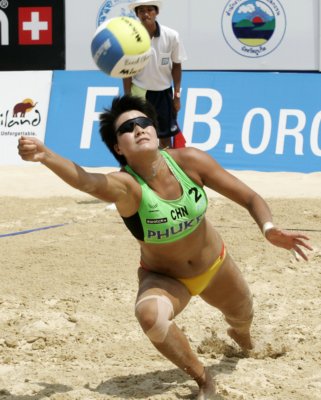 KARON: It was an all-China final in the Swatch FIVB Phuket Thailand Open international women’s volleyball tournament on Sunday. The last stop on the FIVB world tour pitted third-seeded Xue Chen and Zhang Xi against compatriots Tian Jia and Wang Jie in the final.

“This is a great way to end our FIVB season,” said 17-year-old Xue, who teamed with Zhang to win the top spot at the May tourney in China, where they defeated Tian and Wang for the Shanghai crown.

For Xue, the final also completed the most successful season ever for a player her age in international women’s beach volleyball. In becoming the youngest player to win FIVB titles, she and Zhang finished third in the points standings (5,120) with US$195,200 in winnings, four medals and a 55-23 match mark for 13 tournaments.

The Phuket Thailand Open bronze medal was claimed by top-seeded May-Treanor and Walsh as the Americans defeated fourth-seeded Nila Ann Hakedal and Ingrid Torlen of Norway for the second time in three days, with a 21-15, 21-13 win in 32 minutes.

May-Treanor and Walsh split US$16,000 for third place, with the Norwegians sharing US$12,000. The Americans ended the FIVB season in fourth place overall, with US$201,400 in winnings.