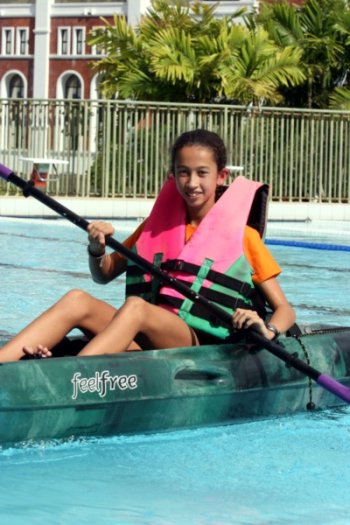 PHUKET: If there were any father-and-daughter team you would place money on being able to paddle 120 kilometers around Phuket by kayak, it would be Les Bird and his daughter Victoria.

Iron-man athlete Les, 59, and seven-time triathlon champion Victoria, 11, plan to circumnavigate Phuket over three days in an effort to raise money for charity.

Victoria, a seventh-grade student at the British International School (BIS), says she is confident “the trip will be a great adventure” and a chance to help children less fortunate than herself.

They will be paddling to raise funds for the 100 Friends international foundation and Phuket Sunshine Village.

They aim to set out on their voyage on January 28, but the pair’s kayak instructor said this would have to remain subject to change based on weather conditions.

Briton Ian Jones, a veteran instructor with the British Canoeing Union (BCU), will work with Victoria and Les on developing the skills they will need to complete the voyage.

“We will need to train Victoria in maneuverability and rescue skills,” he said.

Ian will paddle with the pair on their trip to ensure a safe voyage.

“We will hug the coastline for the majority of the trip, avoiding rocks and paddling with the tide as best we can,” he said.

Although the exact route they plan to take is yet to be decided, Les said the pair will have course markers positioned at various points in waters off Phuket.

They plan to have course officials at each point to record their progress.

While Ian is confident Victoria and Les have the stamina to complete the challenge, he said paddling in the midday sun, staying hydrated, avoiding sunburn and muscle pain were all concerns.

But with the right planning he is adamant Victoria’s “brave” challenge will be a success.

First taking up kayaking 18 months ago in Phuket, Victoria took a BCU training course on the Isle of Wight in the English Channel last summer.

Since then, Victoria and Les have been kayaking off Phuket every chance they get.

“We kept paddling further each time, until eventually I thought we should try and make it the whole way around the island,” Victoria said.

“My classmates were surprised when I first told them about my trip, but they have been very supportive,” she said.

With the backing of headmaster Dr George Hickman, the school has been actively supporting the planned trip.

Victoria’s teacher Katherine Hughes and BIS community and services coordinator Kathy Coulson are working with students to organize a variety of fundraising events in support of Victoria’s challenge.

Year seven students held a bake sale on October 1 to raise money for Victoria’s charity paddle. A week later the school held a “Free Dress Day”, with all students giving a 50 baht donation in exchange for the right to wear their own choice of clothes.

A raffle is also planned for next term.

Thailand not ready to upgrade English