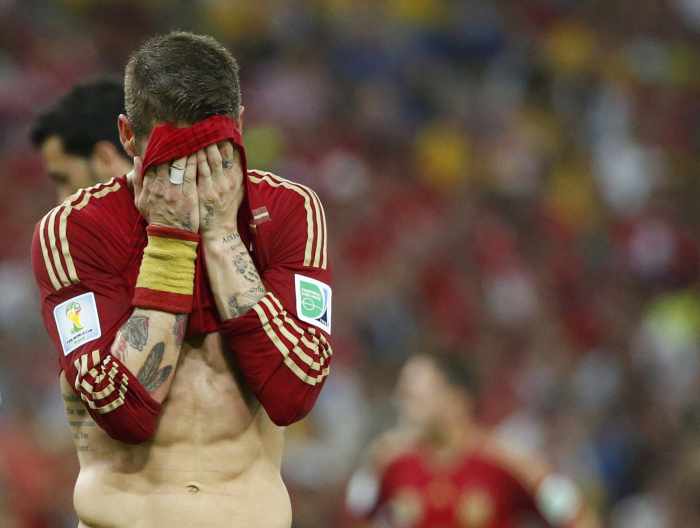 PHUKET: Holders Spain crashed out of the World Cup on Wednesday with barely a fight after their second shock defeat while 2010 runners-up the Netherlands continued their perfect start with another high-scoring win.

Thrashed 5-1 by the Dutch in their opening game, Spain’s normally composed and incisive team again collapsed quickly at the back, this time against Chile who scored twice in the first half then held firm for a glorious win.

“It is difficult to explain,” bemoaned Spain captain and goalkeeper Iker Casillas. “We ask people’s forgiveness. We are responsible but also the first ones to feel the pain.”

The undisputed kings of global football in recent years, Spain won the 2008 European Championship and their first World Cup in South Africa four years ago plus Euro 2012. But their supremacy is no more and an ageing team needs to be reformed.

Chile, who had not beaten Spain in 10 previous games, looked sharper and more aggressive from the start.

Seemingly perennial nearly-men the Netherlands, who have lost three World Cup finals including to Spain in 2010, continued their storming start to the tournament with a thrilling 3-2 victory over Australia.

In a fantastic end-to-end match in Porto Alegre, “Socceroos” veteran Tim Cahill smacked in a spectacular volley that should be a contender for goal of the World Cup.

“This is what it’s all about because everyone dreams of playing on this stage and I want to leave a mark for all the kids back in Australia and around the world to be inspired,” he said.

It was not enough, however, to stem the Dutch, who came from behind to win with a long-range strike by 20-year-old substitute Memphis Depay that made him the youngest player to score in his nation’s long and illustrious World Cup history.

The result was not as flattering as their destruction of Spain, but with maximum points and eight goals scored, coach Louis van Gaal was one of the happiest men in Brazil.

The Netherlands, hoping to finally shed their unwanted tag of being the best country never to win the World Cup, and Chile have now both secured berths in the last 16.

Later on Wednesday, Cameroon and Croatia were set to slug it out in the Amazonian heat of Manaus, with both teams looking for their first points after losing their Group A openers.

A shadow of the side that lit up the 1990 finals, the “Indomitable Lions” are without injured captain and top scorer Samuel Eto’o. Croatia are motivated by a sense of injustice over a penalty Brazil won in their opening defeat by the hosts.

The finals have been a spectacular affair so far, with daredevil teams bringing goals galore and pacy end-to-end football that has eclipsed the duller fare in South Africa.

The football action has also taken attention away from sporadic political protests against Brazil’s government and worries about whether infrastructure would be ready.

This would not be South America, though, if everything went perfectly.

About 200 Chilean fans stormed the media centre at the Maracana stadium just before the game on Wednesday, bursting past security personnel and smashing a door.

Journalists are not the only ones inconvenienced.

Former Argentina captain Diego Maradona, who is working as a TV pundit in Brazil, said on Wednesday he was denied entry to the Maracana for his team’s weekend game against Bosnia.

That followed discomfort for another football great, Brazil’s Pele, who had to listen to the first half of Brazil’s 0-0 draw with Mexico on his car radio due to being stuck in traffic.

While those in Brazil have been thrilled by the action, there has been tragedy in Africa where Nigeria’s Boko Haram and Somalia’s al Shabaab operating in Kenya have killed several dozen people enjoying World Cup games together.

For Thursday, there was an attractive lineup of matches.

First up, Colombia and Ivory Coast clash in Brasilia, both buoyed by opening day wins in Group C.

Colombia may prove to be South America’s surprise package, thrashing Greece 3-0 in their first game in an attacking display that belied the absence of top striker Radamel Falcao.

Ivory Coast are looking like Africa’s best hope after a promising 2-1 win over Japan inspired by veteran Didier Drogba who came off the bench when they were losing.

The second game of the day is a more desperate affair, with England and Uruguay smarting from opening defeats and hoping to justify their reputations with a first win in Group D.

The Japanese may have been distraught at letting a lead slip to the Ivorians, but they at least know how to cope with defeat.

The Asian champions found some solace and had a good heart-to-heart in a shared jacuzzi session. “We told each other how rubbish we were but not to let it get to us. It’s good to finish things off with a laugh,” said striker Yoshito Okubo.

Anyone else needing cheering up might want to head for Belo Horizonte. Binmen there are entertaining fans by singing and tapping out samba rhythms as they trundle through the street after dark picking up rubbish.

“This is the home of music and football!” said one rubbish-collector Matheus Pinto, 20, wearing Brazil colours over his working garb as he tapped out samba on the back of a lorry.