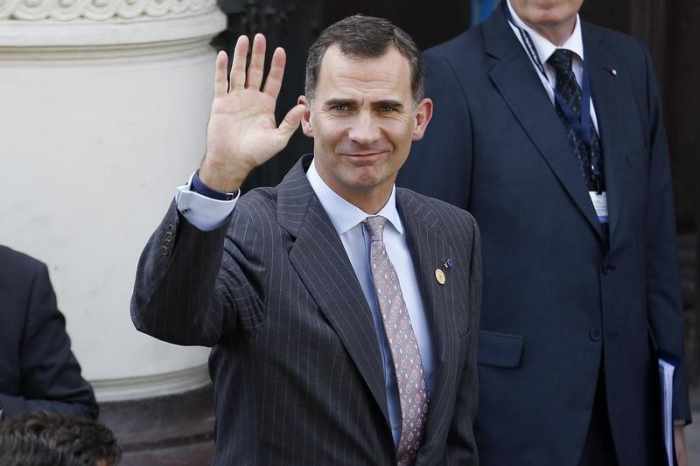 PHUKET: Spain’s new king, Felipe VI, will be sworn in on Thursday in a low-key ceremony which monarchists hope will usher in a new era of popularity for the troubled royal household.

Felipe becomes king after his father, Juan Carlos, abdicated earlier this month following a series of scandals that led many Spaniards to question the role of the monarchy itself.

The ceremony, at Spain’s lower house of parliament, has little pomp and circumstance compared with royal handovers in other countries. It is more of a legal process, attended by lawmakers, high-level politicians and some members of the royal family. No foreign leaders have been invited.

The event has been designed to chime with times of austerity, palace officials say, mindful that more than one in four Spanish workers is jobless despite an incipient economic recovery.

Hopes for the new king are high, and some believe that, despite his role being mainly symbolic as head of state, he will use his position to push dialogue over the challenge of a separatist movement in wealthy northeastern Catalonia.

Felipe, who is 46, will wear military uniform with a sash and swear loyalty to Spain’s constitution before addressing the chamber. He will then be driven through central Madrid with his wife, Queen Letizia, a former journalist.

His father Juan Carlos will not attend the event to allow the spotlight to rest fully on the new monarch, according to the palace.

The outgoing king and his wife, Queen Sofia, will also stay away from an afternoon reception at the Royal Palace with 2,000 guests from all walks of society.

Juan Carlos and Sofia will however greet crowds from a balcony at the Royal Palace alongside the new monarchs.

King-to-be Felipe has remained untouched by a royal corruption scandal, in which his brother-in-law is charged with embezzling millions of euros of public funds in a case that shocked ordinary Spaniards.

Juan Carlos also lost favour after going on a secret elephant hunting trip at the height of Spain’s financial crisis in 2012.

While polls show the decision to hand over to Felipe has boosted the popularity of the royals, almost two thirds now also support the idea of a referendum on whether Spain should continue to be a constitutional monarchy, according to a recent poll by Metroscopia for El Pais newspaper.

Security forces are taking no chances and police have carried out house-to-house searches along the route King Felipe will be driven, with 7000 police and 120 snipers out on the streets. A Republican rally has been refused authorisation by the Madrid authorities.

Red and yellow flowers – the colours of Spain’s flag – are decorating the route from Congress to the Royal Palace that will be taken by the motorcade and an escort of mounted guards.

Hundreds of Madrid buses will be decorated with Spanish flags and the palace is giving out 100,000 flags for well-wishers to wave as the new king is driven to a reception at the royal palace, a 1738 building used for visits of heads of state and special ceremonies.

Iraq asks US for air support to counter rebels