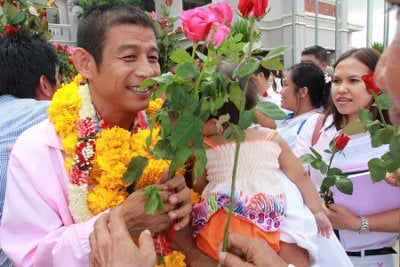 In the preliminary vote count, Mr Chaianan scored 5,437 votes to defeat his only rival for the Kathu top seat: two-time former Kathu Mayor Prasert Khaokijpaisarn. Mr Prasert was elected to his first four-year term as Kathu Mayor in 2000 and re-elected in 2004. However, Mr Prasert lost the 2008 election to Mr Chaianan.

A total of 9,516 votes were cast in the mayoral election, including 244 spoiled ballots and 362 people ticking the “No Vote” option on the ballots.

According to poll officials, a total of Phuket 23,041 voters turned out to vote.

The Phuket office of the Election Commission announced the preliminary results this morning as follows:

Phuket Election Commission Director Kittipong Thiengkunakrit told the Phuket Gazette this morning, that the PEC had yet to receive any complaints of voting or canvassing irregularities.

“We will call the poll officials in to confirm the election results this week,” Mr Kittipong said.

“Then we must forward the preliminary results to the Election Commission of Thailand’s head office in Bangkok for confirmation before Mr Chaianan and the other winners in the election can be installed as mayor and councilors, respectively,” he added.