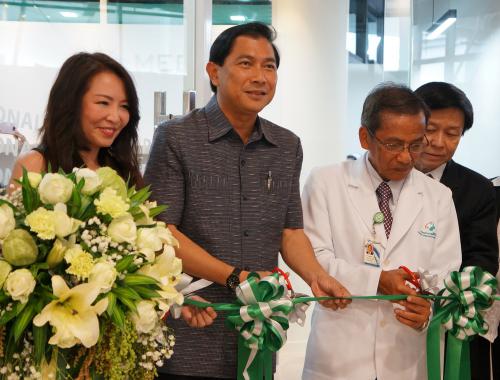 PHUKET: Central Festival Phuket has became the first Central shopping mall in Thailand to have Automated External Defibrillators (AEDs) for use in the treatment of heart attack victims.

Motivated by the death of a patron about four months ago, Central Festival made the AEDs available in conjunction with a new medical bay operated by Phuket International Hospital which opened in the mall yesterday.

“One of our customers had a heart attack after eating dinner in a restaurant in the mall,” said Central Festival Phuket General Manager Wilaiporn Pitimanaree.

“He was a Singaporean here on vacation with his family,” she said.

“He left the restaurant and suddenly fell to the floor. We called our medical team to do CPR and then transferred him to the nearest hospital, Phuket International, but he didn’t make it. His heart had stopped for too long,” she said.

“I witnessed the situation myself. I was so shocked seeing his wife and child crying while he received CPR,” she said.

“That gave us the idea to cooperate with the hospital to have a clinic here, and to have the AEDs available,” Ms Wilaiporn said.

Access to defibrillators gives heart attack victims a higher chance of surviving, by allowing first aid to be provided before paramedics arrive, she said.

“Heart attack victims need their hearts restarted within three to five minutes,” said Phuket International Hospital Director Suchart Areemit, who was on hand for the opening of the medical bay.

“One of the AEDs will be at the medical bay on the third floor near the food court. Two other AEDs will be located on the first and second floors,” Ms Wilaiporn added.

Phuket Governor Maitri Inthusut also attended the opening of the new medical facility, and praised the mall for providing life-saving services for its patrons.