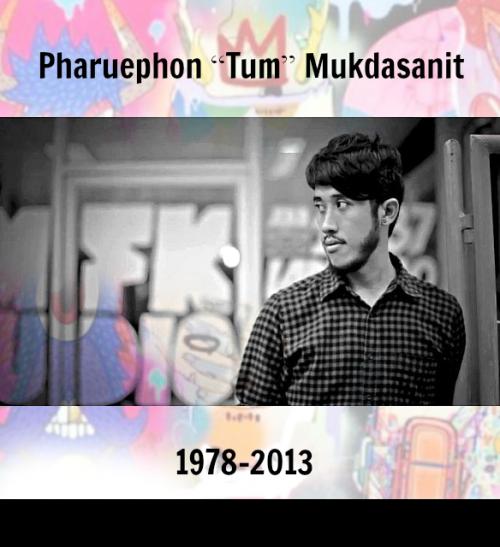 PHUKET: One of Thailand’s best-known graphic designers, Pharuephon “Tum” Mukdasanit, was pronounced dead at Bangkok Hospital Phuket this morning after being pulled from the surf by lifeguards at Kata Beach on Saturday.

Mr Pharuephon, known to his many youthful fans by the moniker “Mamafaka”, was pronounced dead at 2:50am, a hospital medic told the Phuket Gazette.

He was set to turn 35 this Saturday.

“He was in coma since being transferred from Patong Hospital to our hospital,” the medic explained.

“He was keep in the Intensive Care Unit the entire time,” she added.

At around 4:30pm, when he went swimming, a large wave nearly swept him out to sea. He was pulled out from the water unconscious by lifeguards and administered CPR before being taken to Patong Hospital.

He was later transferred to Bangkok Hospital Phuket near Phuket Town.

Mr Pharuephon’s final journey to his hometown Khon Kaen began at 10am today. The funeral will be held on Sunday.

During his tragically short career, he won a slew of awards and was viewed as a figurehead for a new generation of designers and artists who are bolder and less tradition-bound than their predecessors.

At the time of his passing, his impressive client list in included the likes of Converse, VANS, K-Swiss, Billabong, CE Toys, M150, ISUZU, Smirnoff, V.O.X, Yamaha and Tiger Beer.

Three days before his death, he won the Best Illustrator Style Icon at the Cheeze Award 2013 festival in Bangkok.