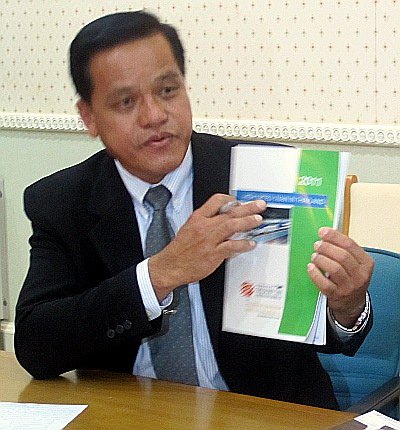 PHUKET: The latest firm to present itself as a contender for building Phuket’s light rail system yesterday proposed building a skytrain – like the one in Bangkok – as the island’s mass transit system instead.

“The concept will be similar to the Airport Link in Bangkok, but slightly lower in height,” Mr Tophong said.

“We will take care of loan arrangements for the project, no matter how much, with no interest and no concession [agreement].” he added.

Mr Tophon said he had already gained tacit approval from the Thai Cabinet before Parliament was dissolved to make way for the July 3 general election.

“Phuket Province would be able to pay us back under a 30 or 50-year [plan], depending on the MoU [Memorandum of Understanding] signed,” he said.

“We are not concerned about making money from the interest and we will not be involved in any role after construction is completed…. We just want to show our work,” he added.

Mr Tophon said his company was ready to move quickly on starting construction.

“Within 30 days of signing an MoU, our own engineers will be ready to take care of the entire construction [part] of the project,” he said.

Governor Tri replied, “I have discussed this issue with the relevant officers. We will arrange a place and time for all interested investors to present their proposals.”

“After we consider all bidders, we will present the [selected] project to the Cabinet to proceed,” he said.

Phuket Vice Governor Nivit Aroonrat last week announced that investors interested in bidding for the project have until June 16 to formally express their interest.

However, Gov Tri yesterday stressed the need for the mass-transit system to connect Phuket International Airport to the International Convention and Exhibition Center (ICEC) in Mai Khao.

“The plan for the ICEC is already done. We will call for bids in August and construction will begin by September. The ICEC should be completed by the end of 2012,” he said.

“I would like to see both projects, the ICEC and the mass-transit system, developed simultaneously. But regardless, the [mass-transit] project will start in 2012,” Gov Tri said.

If all goes well, a successful candidate for the mass-transit system may be announced as early as September or October this year, the governor added.