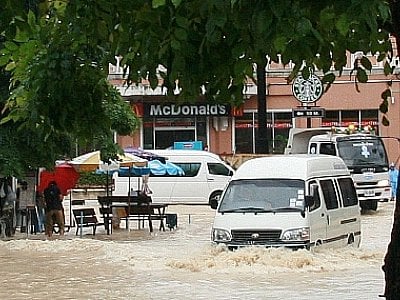 PHUKET: Emergency response crews across Phuket continued their clean-up operations as the flood waters subsided and breaks in the rain came late this afternoon.

“Today, there are no major flood waters left standing in the Patong area. We started our cleanup work yesterday, especially in the hard-hit areas,” Wisit Methasoonthornpot, chief of the Patong Municipality Disaster Prevention and Mitigation Division, told the Phuket Gazette.

Locations in Patong that suffered the most were the Laem Petch and Loma Park intersections, the Sainamyen intersection, Baan Zaan Market, Soi Sansabai in front of Soi Kuan Yang, the entire length of Ratchapatanusorn road as well as Phang Muang Sai Kor Road, and even and 50 Pi Road which runs across the base of the hills at the back of the resort town.

“Yesterday, we emptied the basement level of Patong Hospital. We also removed the sand that washed onto the road in front of the Novotel Hotel at Kalim and at Kuan Yang curve on Patong Hill. Rain always washes sand onto the road at those two spots,” said chief Wisit.

Patong Hospital Director Dr Phumin Silaphan today told the Gazette that the earliest he expected the hospital to resume full services was Wednesday.

“The basement has been drained, but the rain flooded our generator room, forcing us to shut down our dental clinic, operation theater and delivery ward, and to suspend any laboratory work,” he said.

Island-wide, it is still too early to assess the full impact of the floods.

According to the damage report issued yesterday by the provincial DDPM office (DDPM-Phuket) in Phuket Town, Kamala was particularly hard hit, suffering an estimated total of 1.22 million baht in damage.

Floods there directly affected an estimated 1,000 residents and about 150 households, with about 90 buildings sustaining damage totaling about 800,000 baht.

Four roads and seven dams were damaged to the tune of about 400,000 baht, and a five-rai rubber and banana plantation was reported as suffering damage valued at about 20,000 baht.

A combined 500 residents in about 250 homes were directly affected in Rassada and Chalong, said the report.

In Thalang, about 360 residents in 120 households in Thepkrasattri and Srisoonthorn sub-districts were affected by the floods.

An estimate of the damage to Patong has yet to be reported to the DDPM.

“We are waiting for more updated damage reports from the local administrations throughout Phuket,” one DDPM officer said.

The officer added that – apart from 20-year-old British tourist Charles Anthony Thomas being electrocuted on Soi Bangla – there had been no other deaths or people reported missing as a result of the floods.

“Regardless, our officers are still on 24-hour standby to provide assistance just in case,” she said.